It looks like 2022 will be a great year for all things LGBTQI+ in movies and shows.

2022 feels different, doesn't it? There is a sense that we've all, collectively, come through something terrible, and now everyone wants to unapologetically live their best lives.

And looking at the upcoming slate of LGBTQI+ releases that Hollywood has in store for us this year, it looks like they're finally giving the people what they want.

END_OF_DOCUMENT_TOKEN_TO_BE_REPLACED

Listen, it isn't as if sexuality has been completely kept in the closet by mainstream movies and shows - Moonlight won Best Picture, It's A Sin was one of the biggest hits of 2021, and Heartstopper is still atop of trending list on social media - but the upcoming line-up of big 2022 releases feels like it is going to hit different.

These are huge releases, going out on huge platforms with a huge marketing push. These aren't indie releases hoping to build traction by word-of-mouth, this is some of the biggest companies in Hollywood making and distributing and celebrating queer content.

First of all, let's take a look at Fire Island. Remember when Clueless remade Jane Austen's Emma into a teen rom-com? Fire Island is basically a gay adaptation of Pride & Prejudice:

END_OF_DOCUMENT_TOKEN_TO_BE_REPLACED

Starring Joel Kim Booster (Shrill), Bowen Yang (Saturday Night Live), Conrad Ricamora (How To Get Away With Murder) Margaret Cho (30 Rock) and James Scully (You), it is set on the titular island, world famous for its annual LGBTQI+ pride celebrations. Against this very modern setting, a very old-school romantic tale will play out. The movie will arrive on Disney+ on Friday, 3 June.

Next up, an actual historical moment in Hollywood history: BROS. is the first major Hollywood production to be written by and have its leading star played be a publicly out gay man.

END_OF_DOCUMENT_TOKEN_TO_BE_REPLACED

Coming from the director of Forgetting Sarah Marshall and the producer of The 40-Year-Old Virgin, featuring an entirely LGBTQI+ cast, it tells the story of a podcaster (Billy Eichner) facing the trials and tribulations of the modern gay dating scene. The creators don't shy away from the raunch either, as the red-band trailer above can testify to.

The rom-com will arrive in Irish cinemas on Friday, 28 October.

But it isn't all just romance and comedy, as we're also getting the psychological horror They/Them will look to tackle a very topical subject: conversion therapy. 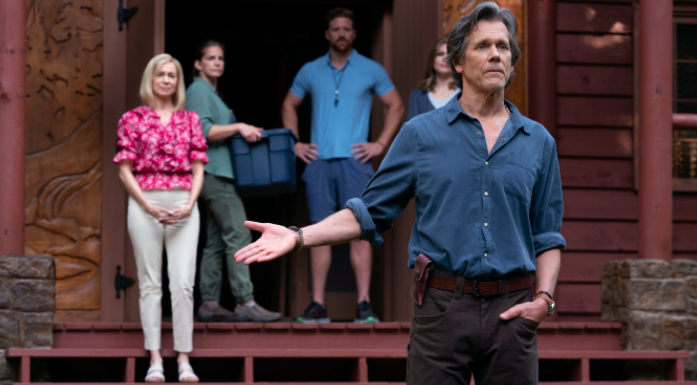 Produced by horror legends Blumhouse, it stars Kevin Bacon, Anna Chlumsky (VEEP) and Carrie Preston (The Good Fight) as camp counsellors who are attempting to "turn" a group of teenagers straight and cisgender, using some horrendous psychological tormer.

It will be the directorial debut of John Logan, who previously wrote the Oscar-nominated scripts for Gladiator, The Aviator and Hugo, and of this project, he said:

"I’ve loved horror movies as long as I can remember, I think because monsters represent 'the other' and as gay kid I felt a powerful sense of kinship with those characters who were different, outlawed, or forbidden. I wanted to make a movie that celebrates queerness, with characters that I never saw when I was growing up. When people walk away from the movie, I hope they’re going to remember the incredible love that these kids have for each other and how that love needs to be protected and celebrated."

The horror movie will arrive on Peacock in the States on Friday, 5 August, and should arrive here around that same time.

And speaking of Peacock, the U.S. streaming service just released the brand new trailer for what many will feel is the O.G. series for all things LGBTQI+. Yep, they're rebooting Queer As Folk.

Transporting the story to New Orleans, it will see a group of queer friends, families and lovers all dealing with the aftermath of local tragedy, but attempting to overcome it with celebration. Kim Cattrall and Juliette Lewis feature amongst of cast of mostly new arrivals, but this will likely be another must-watch when it arrives on the streaming service in the States on Thursday, 9 June. (Again, we should expect to see it over here around the same time.)

popular
5 years ago, Hollywood took a massive gamble on a huge sequel... and lost big time
Netflix has just added 12 very big movies to their library
One of the most underrated crime thrillers of recent years is among the movies on TV tonight
Netflix backtracks on anti-password sharing measures following user outcry
Tom Hardy set to play Hannibal Lecter-type serial killer in new series
Guy Ritchie's new war movie looks like it'll be a very emotional watch
The 50 most iconic songs of all time* have been revealed
You may also like
1 day ago
Can you ace this ultimate Brendan Fraser quiz?
1 day ago
Dave Bautista and Jason Momoa's 'Lethal Weapon' style buddy cop movie set to shoot next year
1 day ago
Netflix backtracks on anti-password sharing measures following user outcry
2 days ago
40 years ago, a sci-fi horror with one of the best special effects of all time was released
2 days ago
Irish animation studio to make new episode of Star Wars show
3 days ago
One of the best prison films of all time is among the movies on TV tonight
Next Page