New teasers for Avengers: Infinity War may tell us who Thanos' first victims are

This is all guess-work right now, but still, potential SPOILERS!

Ninteen movies over eleven years have led to this, an all-out intergalactic war with pretty much every major character from the Marvel Cinematic Universe getting involved in the scrap.

Yep, we're on the cusp of Avengers: Infinity War, and the arrival of big space baddie Thanos (Josh Brolin), who has been hinted at taking aim at Earth for some time now. 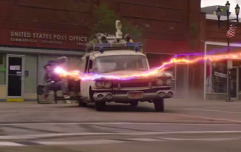 END_OF_DOCUMENT_TOKEN_TO_BE_REPLACED

With his plan to bring balance to the universe, which in his eyes means allowing half of everything to live and the other half to... well... die, all eyes have been on who will and won't be making it out of this war alive.

Infinity War aligns with many of the actor's contracts running up, with the big money on Chris Evans and Robert Downey Jnr. being just two of actors we'll be saying goodbye to.

However, these new teasers seem to hint towards the fate of a few others, too.

The first one sees Peter Parker officially knighted one of the Avengers in the wake of Thanos' arrival above New York, as well as the Hulk Hulk-ing out on what looks like Thor's ship from the end of Ragnarok, which could very well explain how it is that Thor gets picked up in the wreckage out in space by the Guardians Of The Galaxy...

The next teaser, titled "End Of Vision", kind of gives the game away in the title.

Yeah, it probably does.

Considering that Thanos' Infinity Gauntlet requires all of the Infinity Gems, one of which is embedded in Vision's forehead and he requires it to stay alive...

We'll know for certain once Avengers: Infinity War is released in Irish cinemas from Thursday 26 April.

The Big Reviewski || JOE · M. Night Shyamalan, Alex Wolff & Thomasin McKenzie talk about their new creepy thriller Old
popular
Dublin cinema named best cinema in all of UK and Ireland
Ireland getting "very close to the end of the pandemic", says Immunology Professor
Ireland's rollout "most successful in Europe" as 70% of adults fully vaccinated, says Stephen Donnelly
Italian FA confirm that Lazio youth player Joseph Minala is indeed 17 and not 42
Tony Holohan says Ireland might be in a position "in the coming weeks" to move away from some restrictions
Irish public advised of top tips to avoid being pestered on 'Flying Ant Day'
Dublin pub hit with 'about 50 or 60' fake bookings on first day of indoor service
You may also like
1 week ago
WATCH: The first trailer for The Last Duel, the epic film Matt Damon made in Ireland
2 weeks ago
Five great new trailers you might have missed this week
3 weeks ago
The King's Man trailer takes us back to the World War One origins of the spy agency
3 weeks ago
WATCH: Roy family goes to war in first trailer for Succession season three
3 weeks ago
Five great new trailers you might have missed this week
1 month ago
Christmas comes early for gamers as FIVE big trailers are dropped this week
Next Page