Sexy, twisted, smart, violent and definitely worth your time.

Having won both Best Director and Best Picture (for The Shape Of Water), he can be pretty much guaranteed to never be anything less than interesting.

END_OF_DOCUMENT_TOKEN_TO_BE_REPLACED

The movie cost $60 million to produce, and after over a month in US cinemas, it has only made - at the time of writing - less than $9 million at the box office.

It is exactly the kind of well-made, adult-aimed project that people complain Hollywood simply doesn't make anymore, yet when one arrives, it gets practically ignored. END_OF_DOCUMENT_TOKEN_TO_BE_REPLACED

Initially set within the world of a travelling carnival, new arrival Stan (Cooper) learns the tricks of the trade from a pair of clairvoyants (Strathairn and Collette), while also falling in love with one of the carnival's performers, Molly (Mara).

Before too long, he is looking to move up in the world, using his new "skills" to trick the richest and most powerful people in the most high-end venues.

Here he crosses paths with a psychiatrist (Blanchett), who goes into business with Stan, allowing him access to her personal files on their marks, using this private information to better inform his scams.

However, it isn't long before talk of his powers reach a very dangerous criminal (Jenkins), and Stan can no longer resist the allure of the power his own manipulations has over others. 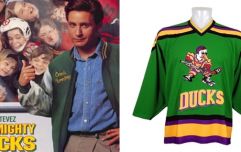 QUIZ: How well do you know The Mighty Ducks?

END_OF_DOCUMENT_TOKEN_TO_BE_REPLACED

It is a dark, emotionally complex and intellectually layered story, set against a magnificently gothic world - imagine Shutter Island if it were directed by Tim Burton - filled with great performances by some of Hollywood's biggest stars.

It is prestige filmmaking, which sometimes suffers under the weight of its own sense of self-importance (under no circumstances should this have been 150 minutes long), with a middle section that somewhat sags when it almost feels as if the movie forgets what story it is telling.

Things rev up again for a consistently tense final act, resulting in one of the more memorably cathartic endings of recent years.

Ultimately, a film this good-looking trying to tell a story this interesting absolutely deserves its place in your schedule while it is available to watch on the big screen.

Nightmare Alley is released in Irish cinemas on Friday, 21 January.