It's not often you see Adam Sandler and 'Oscar buzz' in the same sentence, but it's happening

Could Adam Sandler be in line for an Academy Award?

Critics at the Cannes Film Festival gave Adam Sandler a four-minute standing ovation after watching the actor's performance in The Meyerowitz Stories, sparking talk of a Best Actor Oscar next year.

Sandler, of course, is best known for playing outlandish characters in broad comedies such as The Ridiculous 6, Big Daddy and Jack and Jill but he has shown in the likes of The Wedding Singer, Funny People and the brilliant Punch Drunk Love that there's a lot more to him than LOUD NOISES and fart jokes. 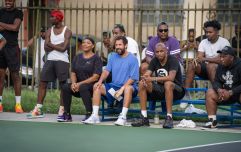 END_OF_DOCUMENT_TOKEN_TO_BE_REPLACED

Although The Meyerowitz Stories is a Netflix release, the latest in a long line of Sandler tie-ins on the streaming service, it also expected to be released in cinemas across the United States and therefore eligible for the biggest awards at the turn of the year.

Clip via The Hollywood Reporter

Manchester By The Sea was also financed by a streaming service, Amazon, yet secured a Best Actor Oscar for its star Casey Affleck earlier this year.