Omniplex to invest €2.5 million to save Roscommon cinema which had shut down with immediate effect

The cinema is set to re-open on Friday 9 August and all former staff there have been offered employment.

On Monday 5 August, locals in Roscommon were shocked to find out that local cinema C&L Plex had closed their doors and shut down with immediate effect.

However, Omniplex Cinemas have stepped in and announced that they will officially be taking over the cinema with an investment of €2.5 million. 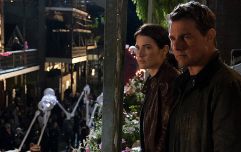 END_OF_DOCUMENT_TOKEN_TO_BE_REPLACED

Not only that, but the chain have offered positions to all of former C&L staff who had lost their jobs just days earlier.

Mark Anderson, Director of Omniplex Cinemas, told JOE that "Roscommon deserves a quality Multiplex, so we have decided to step in to re-open the former C&L Plex cinema and offer employment to former C&L Plex staff members. We hope to re-open the doors on Friday 9 August under the Omniplex Cinema Brand and will then immediately start looking at exciting renovation and expansion plans to secure the long-term future of the cinema.

"As we continue to expand cinemas into large & medium sized towns around Ireland the demand for cinema grows. For the last five years in a row, Ireland has had the highest cinema-going population in Europe and admissions are still growing."

To book your tickets for this or any Omniplex cinema, just head here.

The Big Reviewski || JOE · TBR Spotlight: Loki Episode One - 'Glorious Purpose'
popular
There are four big movies arriving in Irish cinemas this week
Matt LeBlanc has seen the memes of him as every Irish auld lad and very much enjoyed them
Israel launches new airstrikes in Gaza for first time since May ceasefire
QUIZ: Take on this tasty challenge of your General Knowledge skills
Fine Gael should establish a Northern Irish branch as part of party's unification goal, says Varadkar
The 50 most iconic songs of all time* have been revealed
PICS: The man with the biggest penis in the world has one unbelievable problem with it
You may also like
14 hours ago
Late Late Show favourite Adam King to star in animated series
18 hours ago
There are four big movies arriving in Irish cinemas this week
21 hours ago
The director of Luca reveals how Pixar chooses which movie they'll make next
1 day ago
WATCH: Jennifer Aniston and Reese Witherspoon steal the show in explosive first trailer for The Morning Show Season 2
1 day ago
Robert De Niro's new comedy is available to watch at home in Ireland this week
2 days ago
Lin-Manuel Miranda on the strong Irish connection to his new movie In The Heights
Next Page