A partial Inbetweeners reunion is happening on Taskmaster

Mr Gilbert gets to torment Simon once again.

Channel 4 recently aired a special The Inbetweeners reunion show, bringing back the main cast for a two-hour celebration marking a decade since the series first started.

Despite the best of intentions however, The Inbetweeners: Fwends Reunited did not go down well with fans.

The Inbetweeners reunion show was a bit of a car crash, and the cast looked like didn’t want to be there. pic.twitter.com/gmSwIKN1fM 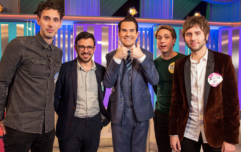 END_OF_DOCUMENT_TOKEN_TO_BE_REPLACED

However, another mini-Inbetweeners reunion is happening this year.

The contestants for season 8 of the Dave panel show Taskmaster - which is of course hosted by Greg Davies - have been announced. And amongst them is Joe Thomas, meaning that Simon and Mr Gilbert will be reunited once again.

The other announced contestants are Iain Stirling (aka the voice of Love Island), Lou Sanders, Paul Sinha from The Chase, and Sian Gibson.

Your #Taskmaster season 8 contestants are here! @IainDoesJokes, @LouSanders, @paulsinha, @Sianygibby and Joe Thomas. The new series will start later this year, so keep your eyes and ears open for more news! pic.twitter.com/NCrJnVhYD1

Since the end of The Inbetweeners and the two movie spin-offs, Joe Thomas has kept busy by starring in student comedy-drama Fresh Meat and sitcom White Gold, as well as British film The Festival.

The latest Taskmaster line-up has made me realise that the Inbetweeners reunion special shoud've just been a mash-up of these two shows.

Kinda wishing the Inbetweeners Reunion was a one off @taskmaster special, woulda been better than the one they actually did 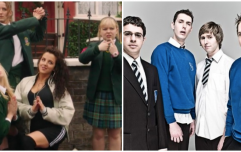 END_OF_DOCUMENT_TOKEN_TO_BE_REPLACED

James Buckley - aka Jay from the show - apologised to fans following the airing of the Fwends Reunited special, calling it a 'car crash'.

"I'm sorry to anyone who feels let down with last nights show. Im especially upset as it really is the fans that made the inbetweeners a success, it certainly wasn't me. I might do an explanation video on my YT, or might just leave it & move on #sorry."

Advertisement
House of Rugby Ireland · Quinn Roux on finding a home in Ireland and Mike McCarthy brings the absolute HEAT!
popular
The JOE Movie Quiz: Week 85
QUIZ: Name all the countries of the EU that contain 2 vowels or less
QUIZ: Can you name the Marvel Cinematic Universe film from just a single screen shot?
This hidden Back to the Future 'mistake' has a subtly brilliant explanation
Recall of Pedigree dog food over safety concerns
The 50 most iconic songs of all time* have been revealed
QUIZ: Can you guess the drink from its can?
You may also like
1 year ago
Personality Quiz: Which Inbetweeners character are you?
2 years ago
New Year's Day will be one of the greatest days in recent TV history
2 years ago
WATCH: This hilarious compilation of all of Jay from The Inbetweeners' best lies is incredible
2 years ago
The Inbetweeners Christmas Special will air on New Year's Day
2 years ago
The Inbetweeners are back filming ahead of their tenth anniversary TV special
2 years ago
The Inbetweeners are reuniting for a special show to mark their tenth anniversary
Next Page