Do we have to do this for everything?

People like to think The Simpsons predicted everything. From Super Bowl results to smart watches, from FIFA's corruption scandal to Donald trump's presidency. And fair enough, there is an episode in which Donald Trump becomes president, released 16 years before he was elected in real life.

Fans are now claiming the legendary cartoon also predicted Kamala Harris becoming vice president in that very same episode, but they are seriously clutching at straws this time. 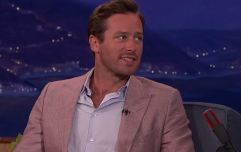 END_OF_DOCUMENT_TOKEN_TO_BE_REPLACED

In episode 17 of season 11, 'Bart to the Future', Bart is shown a vision of his future life, in which he appears to be, shall we say, less successful than his sister. A hippy-looking Bart wonders past the White House, where Lisa Simpson is declaring her pride at becoming the first straight, female president of the US.

In that scene, Lisa is shown saying "as you know we inherited quite the budget crunch from president Trump" - ooooh, spooky.

But the main factor that has people claiming another accurate prediction from the show creators is Lisa's outfit on the day.

Wearing a purple sweater and purple blazer with a pearl necklace, Lisa's outfit was strikingly similar to that which newly elected vice president Kamala Harris wore at Joe Biden's inauguration on Wednesday.

Somewhat of a coincidence, or not, you might think.

Yeah, everything that ever will be has already been on “The Simpsons”. But this is a bit on the nose. pic.twitter.com/SOHKyIzHjn

However, the claim all fall down in the detail.

Sure, Lisa is taking over from Trump, just like Biden and Harris are, but Harris is VP, not president.

House of Rugby Ireland · Ireland's feel-good win, Casey's initiation song, scrapping Sexton and Scott Williams interview
popular
Varadkar felt "very bad" for missing Irish reopening dates
Eoghan McDermott to leave RTÉ after six years (Report)
QUIZ: Can you answer all the £1 million questions from Who Wants to be a Millionaire?
Someone in Ireland is €500,000 richer following Tuesday's EuroMillions draw
Sony are giving away a free game to all PS4 and PS5 owners
BBC reveals Season 6 of Line of Duty is coming later this month
Impact of vaccination on healthcare workers "phenomenal"
You may also like
1 hour ago
Prince Philip undergoes ‘successful procedure’ for heart condition
1 hour ago
European Medicines Agency begins rolling review of Russian Sputnik V Covid-19 vaccine
2 hours ago
Australian teenager dies after being stung by box jellyfish
5 hours ago
SpaceX Starship rocket nails landing for the first time, then explodes
1 day ago
It's 'unrealistic and premature' to think the pandemic will end this year, says WHO
2 days ago
EU Commission to propose 'digital green pass' for EU travel this month
Next Page