PIC: Avengers 4 directors post mysterious photo to announce a wrap on the movie

You should have seen Avengers: Infinity War by now, but just in case you haven't, we're charitably warning you to look away now so it doesn't get spoiled for you.

Are you looking away? 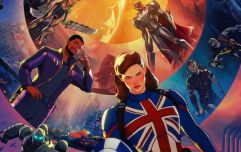 END_OF_DOCUMENT_TOKEN_TO_BE_REPLACED

After half the universe got turned to dust by Thanos' Infinity Gauntlet back in May, fans of the Marvel Cinematic Universe have been desperately waiting for the follow up film — an as yet untitled movie referred to for now as "Avengers 4".

Directors the Russo Brothers have announced that the movie is wrapped, as of Saturday night, and they did so with an extremely cryptic social media post. The image seems to show a box of blue light that becomes almost blinding on the left side of the screen.

Of course, the internet has already gone into overdrive trying to figure out what it means.

This is what happens if you de brighten it a few times over pic.twitter.com/3v5LtEb5I7

The Russo Brothers are no strangers to playing games with their fans on social media. Back in September they shared this image which many suspect contains a clue about Avengers 4...

More questions than answers for now, but the movie is set to drop in 2019 — so we don't have that much longer to wait.

The Big Reviewski || JOE · The Big Reviewski with Andy Serkis, Squid Game follow-ups & the return of Succession
popular
An underrated Denzel Washington thriller is among the movies on TV tonight
Gardaí to target four major offences as part of clampdown on Irish roads
ESB apologise for a number of power outages, including major outage in North Dublin
"It's not Groundhog Day" – Taoiseach takes exception to reopening remark
New €140 million road officially opens today, replacing one of Ireland's most dangerous roads
Expert wants 10 antigen tests delivered each week to every family this winter
QUIZ: Can you master this General Knowledge Quiz?
You may also like
1 month ago
QUIZ: Can you name the Marvel Cinematic Universe film from just a single screen shot?
3 months ago
Tony Stark is the biggest villain in the history of the MCU
3 months ago
The three Marvel movies that the final episode of Loki directly sets up
3 months ago
Loki reveals the MCU's first major LGBTQI+ character
4 months ago
The new Loki show was heavily influenced by three of the best serial killer movies ever made
4 months ago
WATCH: Marvel's Eternals looks very, very different to anything else in the MCU so far
Next Page