You can finally watch The Foreigner, in which Pierce Brosnan plays 'Gerry Adams'

The greatest battle since Godzilla vs. Mechagodzilla is here.

The Foreigner has landed on Netflix, at long last.

You might remember it better as that film in which Jackie Chan faces off against the IRA and Pierce Brosnan plays a politician whom we can't call Gerry Adams, even if we all know that it's Gerry Adams. 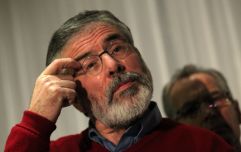 END_OF_DOCUMENT_TOKEN_TO_BE_REPLACED

Based on the novel The Chinaman by Stepehen Leather, The Foreigner is about Ngoc Minh Quon, a Vietnamese restaurant owner in London who loses his daughter in a bombing carried out by a group known as the Authentic IRA.

Taking matters into his own hands, Quon travels to Northern Ireland to speak with a government official and former-IRA leader named Ger... Liam Hennessy (played by Pierce Brosnan). Hennessy, however, insists that he knows nothing about the identities of these bombers.

But Quan isn't having any of this.

What Hennessy fails to calculate is the very fact that Quon is not just a businessman. In fact, he is a special operations soldier from Vietnam whose only aim is to take out the whole IRA and get Not Gerry Adams to confess because, hey, it's not as if anyone has ever tried that before.

Directed by Martin Campbell, whose previous work includes Green Lantern, Casino Royale and GoldenEye, The Foreigner sounded like it was set to bomb. Surprisingly enough, Rotten Tomatoes has given it a 61% Certified Fresh rating. 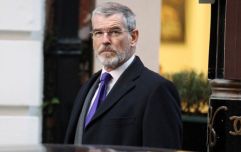 PIC: Gerry Adams has responded to THAT Pierce Brosnan picture in a brilliant way

END_OF_DOCUMENT_TOKEN_TO_BE_REPLACED

Despite this generally well-received reception, a few critics have come out in arms against The Foreigner, primarily because of its timing with the Brexit border talks. The New York Times has called it a "boneheaded update [which] practically defines the term scab picking", while Variety asked, "why, in a world with so many real human threats, does 'The Foreigner' resurrect the 'Troubles'?"

Whatever those critics might say, Gerry still seems delighted with this all when he tweeted about the film last year:

"I never knew Pierce Brosnan was so good looking."

I never knew Pierce Brosnan was so good looking.

Good, bad or middling, this should still be the movie you watch over the weekend. Soon the old playground dispute will be settled: Not Gerry Adams or Jackie Chan, who would win?

popular
One of Keanu Reeves' best movies has just been added to Netflix
The JOE Movie Quiz: Week 131
"Clear as daylight" that unvaccinated people are a risk to themselves and others - Taoiseach
Met Éireann issues Orange weather warnings for five counties ahead of Storm Barra
QUIZ: Do you reckon you can get 15/15 in this General Knowledge Quiz
QUIZ: Can you get full marks in this General Knowledge Quiz?
A terrific crime thriller is among the movies on TV tonight
You may also like
6 months ago
Gerry Adams goes viral on TikTok for coining a new take on the slogan 'Tiocfaidh ár lá'
1 year ago
Supreme Court overturns Gerry Adams prison escape convictions from the 1970s
1 year ago
Simon Coveney once again rules out coalition government with Sinn Féin
3 years ago
WATCH: Gerry Adams talking about his new cookbook might be the funniest thing of 2018
3 years ago
Here's why Gerry Adams didn't want the "dreaded" SSSS code on his boarding pass
3 years ago
WATCH: CCTV clip shows footage of explosive devices being thrown at Gerry Adams' home
Next Page