Heads will roll because The Predator is back.

In many ways, the making of John McTiernan's action classic Predator was defined by the ability of its cast and crew to improvise, adapt and overcome the many production problems that it faced.

Of course, there's the famous story that Jean-Claude Van Damme needed to be replaced as the iconic alien and as for the original design of the Predator, well, it looked absolutely awful - more on that here.

END_OF_DOCUMENT_TOKEN_TO_BE_REPLACED

Aside from this, Shane Black (Hawkins in the original and director of The Predator) was also required to perform some on-set surgery on the script and nearly all of the cast were ill due to contaminated water.

Blain (Jesse Ventura) really did put it best when he said: "I ain't got time to bleed" because much like Dutch when he faced off against the Predator, the entire cast and crew knuckled down and got the job done.

Thank God they did because three decades later, Predator is still a god damn sexual Tyrannosaurus of a film.

With The Predator set to be released in Irish cinemas on 12 September, Shane Black has been very upfront about the additional photography that was required on his film.

"We were trying to cram a lot into a five pound bag. We had a big appetite and wanted to do all of this stuff but to save some money, we needed to shoot during the day because it would be prohibitive during the night," he said.

"I take this on me, but when I saw the footage that was shot during the day - which was the climax of the movie - the Predator just didn't look right. It just didn't look scary in the daytime. The we decided to streamline the plot and concentrate on the scarier elements that would let us do the reshoots at night. The difference is literally night and day."

When JOE got a chance to chat with Boyd Holbrook, lead star of The Predator, he fully supported Black's decision to reshoot those scenes at night because he felt it really paid off during the action-packed finale.

END_OF_DOCUMENT_TOKEN_TO_BE_REPLACED

"Yeah, I was fully behind Shane’s decision and we all sort of knew it at the time of filming, Holbrook said.

"We didn’t know if we were doing it in vain because Shane is so ambitious to do this and you know, literally, you do these scenes and try to make choices economically. Unfortunately, the only way to do all of the script is that you have to shoot it during the day. Unfortunately, it just didn't feel right.

"I’m not a master filmmaker but yeah, I was always curious about that and the funny thing is that we would have saved more money in the long term if we just did it the more expensive way to begin with. But yeah, we basically just had to go back and redo everything that we had already done at night. Ah, it is what it is. It’s a learning experience… we tried to save money and ultimately, we ended up spending more."

As stated in our review of The Predator, this instalment really ups the gore factor and that's something that attracted Holbrook to the project. FYI, if you're a massive Predator fan, there's no need to worry about any PG-13 rating because the film is dripping in red and neon-green blood, right from the get-go.

In fact, Holbrook said that one of his other films, the brilliant Logan, provided the R-rated template and inspiration for the studio and filmmakers to make The Predator as gruesome as they wanted. 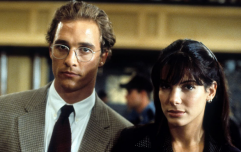 END_OF_DOCUMENT_TOKEN_TO_BE_REPLACED

"We know what works and you can’t do a Predator movie without it being R-rated. It’s not going to work. It’s one of those reasons why Logan was so successful is that people finally got to see what those claws can do and we want to se what thee Predators can do," said Holbrook.

For film fans everywhere, the wait is almost over because the ugliest motherfu**er in the galaxy returns to cinemas this week.

The Big Reviewski || JOE · The Big Reviewski with Dune, a mini-Hangover reunion & the best of Timothée Chalamet
popular
Report: Crew left Alec Baldwin film set in protest before fatal shooting
The JOE Music Quiz: Week 78
The JOE Friday Pub Quiz: Week 266
9 of the best horror movies on Netflix right now
Here's the line-up for tonight's episode of The Graham Norton Show
QUIZ: Time to get down to business with this General Knowledge Quiz
The 50 most iconic songs of all time* have been revealed
You may also like
6 hours ago
Danny DeVito is the fifth hottest man on the planet, according to a new poll
2 days ago
HBO announces a new Sopranos series is in the works... kind of
2 days ago
The cast of Succession on shooting the next season in Ireland
2 days ago
2021's biggest sci-fi epic and 7 more movies and shows to watch this week
2 days ago
The 10 must-watch new (and old) arrivals on Disney+ this November
2 days ago
The first trailer for the Uncharted movie has finally arrived
Next Page