Close your eyes and visualise any Quentin Tarantino movie. What are you picturing? We're willing to bet that there's an awful lot of blood, cursing, sex and probably drugs.

Tarantino has long been known for his ultra-violent movies that owe much to stylistic modes of past decades. However, rumour has it that one of the projects in his pipeline... Well, it's weird as hell. 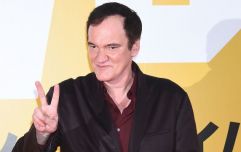 END_OF_DOCUMENT_TOKEN_TO_BE_REPLACED

According to Deadline, "Tarantino has come up with a great idea for a Star Trek movie at Paramount," and has shared the idea with JJ Abrams — who directed the 2009 reboot of Star Trek, as well as Star Trek into darkness. Most recently, sci-fi filmmaker extraordinaire Abrams was a producer for Star Trek Beyond in 2016.

Now the rumour mill is suggesting that he could be producing yet again, though this time with Quentin Tarantino in the director's chair.

It would be a completely unexpected move for Tarantino. Over a directorial career spanning almost 30 years, Tarantino has never made anything but an original film, having both written and directed all of his most famous movies, including Pulp Fiction, Reservoir Dogs and Django Unchained. He has, however, directed for both CSI and ER on television.

The Deadline report suggests that the plan is now to put together a room full of writers to see if the idea has legs, with Tarantino expected to direct if things work out.

The Big Reviewski || JOE · The Big Reviewski with Y: The Last Man, that Malignant ending & a secret streaming service
popular
One of the most-anticipated movies of the last few years is finally available to watch at home this week
Woman dies after being struck by lorry in Kildare
Gardaí warn of scam involving "inappropriate or sexual images" after young boy blackmailed for money
TG4 to air documentary about the Irish woman who shot Mussolini tonight
The film that predicted the pandemic is among the movies on TV tonight
Body of woman found by walker on shoreline in Galway town
QUIZ: Can you get 10 out of 10 in the ultimate Ed Sheeran lyrics quiz?
You may also like
1 year ago
China release of Once Upon a Time in Hollywood on hold over Bruce Lee scene
1 year ago
Acclaimed actor Robert Forster has died, aged 78
2 years ago
A Steve McQueen biopic is in development
2 years ago
Once Upon A Time In Hollywood is Quentin Tarantino's biggest hit in years
2 years ago
Brad Pitt and Margot Robbie completely forgot they were already in a movie together
2 years ago
Tarantino says his Star Trek movie will basically be "Pulp Fiction in space"
Next Page