Countdown has a habit of throwing up the kind of letter combinations that have those of us with more puerile senses of humour guffawing at the telly. For such a sedate and pensioner-friendly show, it doesn't half lend itself to schoolboy humour.

In fairness, it's all about the law of averages. 35 years of airtime is bound to produce some rude selections by sheer probability. Indeed, who can forget this classic...

In TV, like in any job, sometimes you have to work with a**holes. Best thing to do, just keep smiling 😜 pic.twitter.com/byhqzyoFck 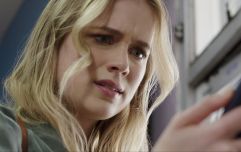 END_OF_DOCUMENT_TOKEN_TO_BE_REPLACED

And of course this...

But Wednesday afternoon's episode was a little more...to the point. Indeed, it seemed as though Rachel Riley was giving us all a subliminal message in this age of shouting your mouth off at every opportunity.

'STFU' - the widely known acronym for 'Shut the fuck up' (for the dads) - came up and everyone was loving it. We can't wait for the next X-rated conundrum...

@RachelRileyRR telling us all what she really thinks 😐 #stfu #countdown pic.twitter.com/IgZdiVh1x0

popular
Met Éireann issues weather warning for three counties
QUIZ: Take your very best shot in this tough General Knowledge Quiz
QUIZ: Can you conquer this delightfully difficult General Knowledge Quiz?
The JOE Movie Quiz: Week 160
The JOE Music Quiz: Week 110
An underrated Jason Statham thriller is among the movies on TV tonight
The JOE Friday Pub Quiz: Week 300 - the Triple Century
You may also like
4 years ago
Is this the greatest moment in Countdown TV history? Like... seriously
4 years ago
Rachel Riley revealed a not-very-daytime phrase on the Countdown letters board
4 years ago
Countdown spelled out a rude Irish slang word on the show this week
5 years ago
Rachel Riley couldn't help but laugh at this risqué Countdown puzzle
5 years ago
WATCH: There was a very rude word used on Countdown today
5 years ago
WATCH: The story of Mayo’s famous curse was told on Countdown this week
Next Page