The problem wasn't obvious to those watching at home.

Randy Orton has apologised to fans for the lighting problems at WWE WrestleMania 35 on Sunday night.

Though it may not have been obvious to those watching the event on television, many of those in attendance at New York's MetLife Stadium struggled to see the action due to the lighting erected above the ring. 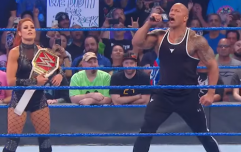 END_OF_DOCUMENT_TOKEN_TO_BE_REPLACED

A fan chant making reference to the blinding lights rose up from the crowd during Orton's match with AJ Styles.

Taking to Instagram after the event, The Viper apologised on behalf of WWE, posting an image of the obstructed view some fans had to put up with.

'For the live crowd that saw this tonight during my match at #WM #wrestlemania at Met Life Stadium tonight, I would like to apologize on behalf of @WWE for screwing up and shining a bright light in your eyes for 95% of our match,' he said.

popular
Gardaí warning people not to make unnecessary journeys in anticipation of Storm Barra
Carlow woman banned from keeping animals for life after starving dogs to death
"Danger to life" risk with Storm Barra "weather bomb", warns Met Éireann
Landscapers is the ultimate true-crime murder mystery show
The JOE Movie Quiz: Week 131
Man dies after being attacked by newly calved cow in Mayo
QUIZ: Name all the countries that contain 11 letters
You may also like
2 years ago
WATCH: Bryan Cranston tells story of how he ended up on Becky Lynch's lap
2 years ago
Becky Lynch makes history by beating Ronda Rousey at Wrestlemania
2 years ago
WATCH: Becky Lynch stars in one of the most bizarre WWE scenes we've seen in years
2 years ago
Becky Lynch has been confirmed as the first woman to headline WWE's Wrestlemania
2 years ago
Becky Lynch ran to assist WWE fan suffering a seizure at signing event
2 years ago
Once again, people are making comparisons between Becky Lynch and Stone Cold Steve Austin
Next Page