What a character: Why Captain Raymond Holt from Brooklyn Nine-Nine is a TV great

We don't believe for a second that we've seen the last of Brooklyn Nine-Nine, despite what those blundering imbeciles at Fox have tried to do by cancelling the greatest American sitcom since Parks and Recreation's final season.

There is still hope.

A show built on the strength of seven fully formed and unique characters, it's got a rapier script and manages to tackle social issues with a light touch that never speaks down to either its players or the audience; we're spared those sugary, closing sermons that marred so many episodes of Scrubs, for instance, or modern, milky atrocities like The Middle or The Goldbergs.

Thank heavens for Brooklyn Nine-Nine, and for Captain Raymond Holt.

The captain of the Nine-Nine and the greatest deadpan creation in the history of situation comedy based entirely on the inner workings of a police precinct in one of New York's five boroughs.

It's not a long list, but he's definitely at the very top.

Why he's a TV great: There has never been a scene in Brooklyn Nine-Nine that has not benefitted from Holt's presence; he's the stony foil to Jake and Charles' buddy schtick, the cure to Amy's neuroses, Terry's ultimate champion, Rosa's partner in repressed emotion, Gina's... Gina's fine, let's be honest, she does her own thing. 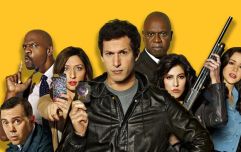 END_OF_DOCUMENT_TOKEN_TO_BE_REPLACED

We dare you to find any character with a disdain for unfamiliar acronyms ("Be right back has the same number of syllables as the acronym, what's the POINT?") and not hold him close to your heart.

He loves a flavourless beige smoothie, his partner Kevin (played by the equally stoic Marc Evan Jackson), his dog Cheddar, a good balloon arch and the physical act of smiling as a way to improve your mood.

He has no time for family photos ("if you love someone, you'll remember what they look like") and speaks wistfully about his former partner, who was homophobic but NOT racist, which "in those days was pretty good".

He's impossible to read, so don't even try, but one thing that's not left to his imagination is the man's hatred of one Madeline Wuntch.

If we could put him in another show: The Good Place. Holt's husband Kevin M. Cozner is already in it... well, the actor who plays him is, and Marc Evan Jackson plays the dead-pan but sassy boss of The Bad Place to perfection. We can totally see Holt turning up in The Bad Place and being more than a little miffed about it, and having some supreme banter with him, along with everyone else on the only other comedy on TV right now that is as funny and smart as Brooklyn Nine-Nine is.

Clip via The Good Place