REVIEW: The Grand Tour is bigger, louder and so much better than BBC's Top Gear

"Let’s just sum this first show up, shall we? I’ve lost my house, we had a fight with audience, someone shot our drone down and we killed three quite major celebrities."

This is The Grand Tour, the long-awaited return of Jeremy Clarkson, Richard Hammond and James May. There's no need for us to go over the circumstances which led the trio to leave BBC's Top Gear, because they do that for us. As the three introduce each other to a cheering crowd, the many dismissals of Hammond and May are listed, while Clarkson is “technically the only one never to get fired”. Bully for him.

The show opens with Jeremy leaving a grey, miserable London for the sunnier climes of Los Angeles, jumping into a rented muscle car and tearing off across the desert, joined by his two compadres, who are then joined by an entire army of vehicles, from 4x4s to Mad Max-esque steampunk contraptions.

...who are then joined by a jet fighter display team flying overhead. When Amazon signed Clarkson, Hammond and May to produce a new TV show, CEO Jeff Bezos described the deal as "very, very, very expensive", and you can see why.

END_OF_DOCUMENT_TOKEN_TO_BE_REPLACED

An army of vehicles storm across the Mojave Desert.

The Grand Tour looks like a million dollars; in fact, it looks like 160 million dollars (the rumoured budget for three series of the show, with each episode costing roughly $4.5m). It's the most expensive-looking show you've ever seen, and between the dazzling array of supercars and the incredible scale of the production, it really looks like money well spent. 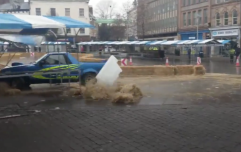 END_OF_DOCUMENT_TOKEN_TO_BE_REPLACED

There were reports in the press that the new show would have to be drastically different to Top Gear, lest the BBC sue Amazon for infringing on their brand, even down to James May's trademark exclamation "cock". It seems like this was a load of old tosh, because the show is almost exactly the same as Top Gear, just bigger and more expensive.

Clarkson has a pop at cyclists, the Toyota Prius, doing 50mph through roadworks, gypsies, Americans saying words wrong, communism, the lot. The hyper-stylish visuals and incredible video photography are back and better than ever - full credit has to go to the production team for pushing the boundaries of making cars look cool even further.

Jeremy Clarkson, Richard Hammond and James May in the new moving studio. 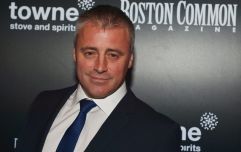 END_OF_DOCUMENT_TOKEN_TO_BE_REPLACED

In a montage of things to come in the series, there are explosions, cars being dropped on other cars, ridiculous challenges, exotic locations, Richard Hammond going "Nooo, this is bad" and James May going "I hate yooouuu". There's a new test track, a new test driver and a fancy new leaderboard, but the idea is the same: drive cars fast, see which is the fastest.

That said, the show hasn't simply fallen on its feet. For over a decade Top Gear came from the same studio every week and clearly the presenters were very comfortable there. Out in the tent, things are a little different: there are new formats to wrangle, new segments to introduce and new audiences every week. Not every joke is a direct hit and some of the scripted schtick that the three made look so natural in Top Gear is less convincing here.

Clarkson, Hammond and May ride again.

What The Grand Tour really excels at, however, is being a show about cars. It was something of a running joke that Top Gear was classed as 'factual' program when so much of the show featured three middle-aged men dicking about for the entertainment of millions. There was a little dicking about in the first episode of The Grand Tour, but there was clearly a decision made to open the series with a show dedicated to cars, specifically hybrid supercars - Porsche vs McClaren vs Ferrari.

Whatever you may think about Clarkson, Hammond and May as personalities, there's no denying their knowledge of and love for cars, and their enthusiasm is infectious. Petrolheads will be thrilled that there is a show back on TV (or on the internet, technically) that speaks their language and articulates what it is about cars and driving them that can be so enthralling.

They haven't sacrificed the laughs in favour of facts, though. There's always room for a gag (the celebrity guest segment is very funny and absolutely the kind of thing they couldn't have gotten away with at the BBC) and the signature style of humour has made it through the transition intact, so if Top Gear tickled your funny bone, The Grand Tour is sure to deliver.

Everyone knows that the thing that made Top Gear work was its hosts, their humour and chemistry, and as hard as Chris Evans tried, he couldn't even begin to step into Clarkson's shoes. It doesn't matter though, because the three of them are back, and apart from a few teething problems, it's like nothing has changed. Fans of Top Gear will not be disappointed. Your saviours have returned.

popular
QUIZ: Can you name all the counties in Ireland without the letter 'E'?
WhatsApp introduces way to choose who can and can't see you're online
Nearly 100 flights delayed at Dublin Airport on Monday
QUIZ: Can you get top marks in this short but tricky Irish geography quiz?
RTÉ tries to solve Michael Collins murder in new documentary
Netflix has just added an incredibly tense 97-minute thriller
QUIZ: Can you name all the counties in Ireland with an ‘N’ in their name?
You may also like
4 years ago
Jeremy Clarkson spins car into studio in first look at new series of Who Wants to be a Millionaire?
4 years ago
Matt LeBlanc reveals how he stepped "into a media sh*tstorm" on Top Gear
5 years ago
Richard Hammond 'air-lifted to hospital' following car-crash in Swiss mountains
5 years ago
Third time's a charm as U.S. remake of Top Gear gets unexpected hosts
5 years ago
WATCH: Matt LeBlanc went 'full Joey' on Top Gear last night and it was truly cringeworthy
5 years ago
WATCH: Footage from the upcoming new season of Top Gear
Next Page