WATCH: Richie Sadlier opens up about sexual abuse he faced as a young teenager

Richie Sadlier appeared on The Late Late Show on Friday night to discuss the release of his new book Recovering.

While chatting with Ryan Tubridy on the show, he discussed the fact that he was sexually abused as a young teenager, and the effect it had on his life. 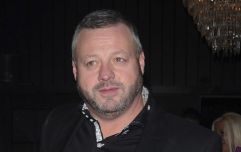 END_OF_DOCUMENT_TOKEN_TO_BE_REPLACED

The former Milwall player said that the abuse took place over a period of six weeks when he was 14-years-old, by a man who was treating him for a sports injury.

He said he now regrets not telling his family and friends at the time, saying "I almost gave him a free pass."

He said: "I tormented myself with those questions for years. And because I didn't tell anyone, like if you were a pal of mine I would never tell you.

You can see a clip from the show here:

'My thoughts were bonkers about the whole thing. But I thought it was my failing' - Richie Sadlier opens up about being sexually abused when he was 14 years old pic.twitter.com/8T3tEqmJz5

Shane Lowry was also on the couch on Friday night, discussing how he deals with the highs and lows of being a professional golfer.

popular
Eoghan McDermott to leave RTÉ after six years (Report)
€17,500 worth of cocaine found at street party in Limerick
Sony are giving away a free game to all PS4 and PS5 owners
One man has been charged following Limerick street party, 50 FPNs issued
WATCH: Michael B. Jordan leads Jack Ryan spin-off Without Remorse
Robbie Williams to be played by CGI monkey in biopic based on his life
NUIG students told to write 2,000 word essay for breaching Covid rules
You may also like
1 day ago
A man has died following a road crash in Louth
5 days ago
Body of third man found following murder of two men in Cork
5 days ago
Two elderly men found dead as Gardaí "urgently" search for red van in Cork
6 days ago
Two men have died following a road crash in Cork
6 days ago
Male in late teens seriously injured in Dublin shooting
1 week ago
Appeal made for witnesses following serious road crash in Kerry
Next Page