The Rock says the controversial "generation snowflake" comments are fabricated

He's taken to social media to deny the comments were ever made.

Dwayne "The Rock" Johnson made headlines Friday after an interview with The Daily Star was published online, in which The Star reported an "exclusive interview" with the actor saying "this generation are looking for a reason to be offended."

On Friday night, The Rock shared a video on his Instagram and Twitter where he said the interview never happened and was a complete fabrication. 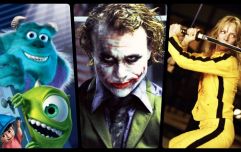 END_OF_DOCUMENT_TOKEN_TO_BE_REPLACED

“The interview never took place. Never happened. Never said any of those words,” Johnson said on Instagram, saying he was “baffled” to learn he was reportedly in a heated battle with millennials.

"Completely untrue. One hundred percent fabricated,” he said. "I always encourage empathy, I encourage growth but most importantly, I encourage everybody to be exactly who they want to be."

The father-of-three added in the caption: ‘Settin’ the record straight. The interview never happened. Never said those words. 100% false.

"If I ever had an issue with someone, a group, community or a generation — I’d seek them out, create dialogue and do my best to understand them.

"Criticizing ain’t my style. I don’t cast stones and we all get to be who we are. #millies #plurals #boomers #TequilaGeneration."

Below is his statement in full.

"I can't believe I have to do this again and set the record straight on something, but I'm happy to do it. Earlier today online, an interview dropped with me — apparently it was with me — where I was insulting and criticizing millennials. The interview never took place. Never happened, never said any of those words, completely untrue, 100% fabricated. I was quite baffled when I woke up this morning.

"You know, I've gained such a great trust and equity with all you guys all around the world over the past couple of years, and you know it's not a real D.J. [Dwayne Johnson] interview if I'm ever insulting a group, a generation, or anyone. Because that's not me, and it's not who I am, and it's not what we do.

"So to the millennials, the interview never happened. To the plurals, the baby boomers, the snowflake generation — I don't even know where that term came from — the tequila generation! That's a generation I just started. That's a good one. You want to join it. I always encourage empathy, I encourage growth, but most importantly I encourage everybody to be exactly who they want to be. Have a good day."

House of Rugby Ireland · Ireland's feel-good win, Casey's initiation song, scrapping Sexton and Scott Williams interview
popular
Eoghan McDermott to leave RTÉ after six years (Report)
Sony are giving away a free game to all PS4 and PS5 owners
One man has been charged following Limerick street party, 50 FPNs issued
Two men arrested in Gardaí probe into bogus tradesmen
Turns out one of WandaVision's biggest solved mysteries hasn't actually been solved yet
Dolly Parton sings 'Jolene' remix before getting vaccinated with jab she helped fund
One of the most fertile men in Ireland is a guest on tonight's Claire Byrne Live
You may also like
1 month ago
Dwayne 'The Rock' Johnson responds to being named Most Likeable Person in the World
5 months ago
The Rock has endorsed Joe Biden for US election
6 months ago
Dwayne 'The Rock' Johnson has tested positive for Covid-19
1 year ago
New comedy TV series based on The Rock's early days is in development
1 year ago
The new WWE video game is astonishingly broken
1 year ago
WATCH: The Rock and Becky Lynch combine brilliantly on WWE Smackdown
Next Page