Dwayne 'The Rock' Johnson is one of the world's biggest stars and greatest box office draws, and one of the reasons for that - beyond his unlimited likeability and charisma and the fact he's larger than most studio apartments - is his unique worth ethic.

To date his movies have made over $6.63 billion at the box office, and while not all of his films have been hits with the public (remember Doom?) or with the critics (remember Pain And Gain?), more often than not, when you're going to see a film with The Rock in it, you're guaranteed a good time.

We've had a quick look at his upcoming CV, and we're already very excited about seeing all of this, but also very exhausted on his behalf, because this is A LOT.

END_OF_DOCUMENT_TOKEN_TO_BE_REPLACED

The Fate Of The Furious (aka Fast & Furious 8)

What? Do we ... do we really have to tell you? There's been seven of these already, and they got really good when he joined in Fast Five. And this one looks deliciously bonkers.

END_OF_DOCUMENT_TOKEN_TO_BE_REPLACED

What? One of the worst shows ever to have such a lasting effect on humanity, the remake comes from the director of Horrible Bosses, and finds The Rock teamed up with Zac Efron in order to save the beach and solve a murder. Looks like fun to us.

END_OF_DOCUMENT_TOKEN_TO_BE_REPLACED

What? A sorta-sequel, sorta-remake of the 1995 movie, but this time the board-game has been updated to a video-game, with The Rock playing the in-game avatar to a teenager. He's joined by Kevin Hart, Jack Black and Karen Gillan. Early word has it being very high in action, and you should expect a teaser trailer any day now. 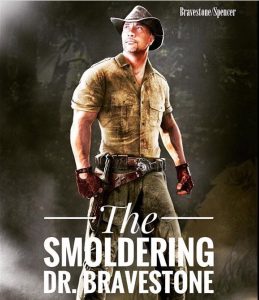 Fighting With My Family

What? The Rock plays a former wrestler (STRETCH!), and he and has family perform in small wrestling venues around the country. However, his kids want for a bigger life, and long to be a part of the WWE. Vince Vaughn, Nick Frost and Game Of Thrones' Lena Heady fill out the cast, while the movie is written and directed by Ricky Gervais' besto Stephen Merchant. 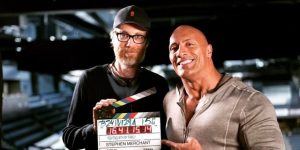 What? Based on a classic 80's video-game, where giant apes and monsters destroy the city, and... that's kind of it, actually. We're still waiting on that One Great Video-Game Adaptation, but we're sure if it is going to happen, The Rock is the one who can make it happen, even though we currently know SFA about how this could work as a movie.

What? We'll just let The Rock fill you in...

BREAKING: Grateful to share this big news. Universal Studios and @Legendary Pictures have declared JULY 13th 2018 SKYSCRAPER weekend. Massive scale of a movie we've been developing for almost two years and we start shooting this August - in CHINA. Our script, written and to be directed by Rawson Thurber, focuses on the world's largest skyscraper - that's on fire. A towering inferno almost a mile into the sky and my wife and kids are trapped on the top floor. My character is a disabled US War Vet and former FBI Hostage Rescue Team leader. This character is inspired by the thousands of disabled US veterans and war heroes I've had the honor of shaking hands with over the years. This character is also an homage to the every day man and woman who, despite all odds, will dig deep and do everything possible to protect and save their family. Research for this film has been a real education for me (and that's saying a lot considering my horrible freshman year GPA) from meeting with the world's top skyscraper architects to spending amazing time with our US combat and disabled vets. Good thing I'm not afraid of heights. But at 4,000ft it's a different story. Let's get to work. #CHINA #SevenBucksProds #FlynnPicturesCo #Zhao #SKYSCRAPER JULY 13th 2018

What? One of the future DC comic-book movies, which tells the story a young boy named Billy Batson who can become an adult superhero whenever he utters the magical word Shazam. The Rock looks to be going very much against type, playing the movie's super-villain Black Adam. In fact, the character is one of the few who can match Superman in terms of powers, and there's already word that Warner Bros. and DC will be giving him his own spin-off, standalone Black Adam movie not long afterwards. 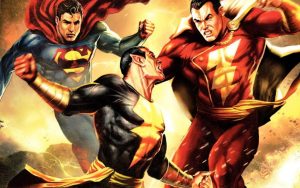 What? Still just a rumour at this point, but the rather insane but still totally brilliant story of a truck driver getting drawn into a magical, mystical war has been mooted for a while now, with The Rock set to play Jack Burton, a role once occupied by Kurt Russell. So far just writers have been assigned to the project, but they're the same folks who wrote X-Men: First Class, so we've got hope.

Clip via Film Trailers In HD And HQ

Journey 3: From The Earth To The Moon

What? While he wasn't even in the first one (it starred Brendan Fraser, remember him?), he did rock up for the sequel, which went on to make $335 million on a $79 million budget, so Part 3 was always inbound. The Rock has always made time to make more family friendly stuff, from Journey 2 to The Tooth Fairy to Race To Witch Mountain to Moana.

What? Doc Savage was seen as "the original super-hero", raised by a team of scientists to travel around the world in the 1930's, defeating bad guys along the way. This update is being written and directed by Shane Black (Kiss Kiss Bang Bang, The Nice Guys, Iron Man 3), and he's already said he can only picture The Rock in the title role. So here we are. 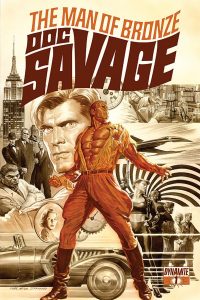 What? The first one was a surprise hit - $474 worldwide box office on a $110 million budget - in which The Rock was a helicopter pilot who had to save his family from a giant earthquake. The sequel, we imagine, will be along the same lines? As in... how do you progress a series about giant earthquakes? The only option is MORE earthquakes, right? Regardless, we'll still go see it.

popular
Ireland could see more cost of living "challenges" if war in Ukraine continues, says Taoiseach
A fun '90s action flick is among the movies on TV tonight
QUIZ: Can you name whether all these Irish towns are west or east of the River Shannon?
Ticket prices for concerts set to rise due to inflation
Tax energy companies' profits to help with cost of living crisis, says think-tank
HSE establishes team to monitor monkeypox as virus cases more than double in UK
You may also like
1 day ago
Oscar winning composer Vangelis has died, aged 79
2 days ago
Netflix may premiere their movies in cinemas 45 days before streaming
3 days ago
Full update revealed on all future Star Wars movies and shows
4 days ago
Amazon Prime Video has just added 21 big movies to its library
4 days ago
11 bad movies that actually got good reviews when they were released
5 days ago
QUIZ: Can you name the disaster movie from a single image from each disaster
Next Page