Because who among us truly doesn't love a bit of Dermo in our lives?

It's Sunday - and although our schedules are already chock full with other popular culture moments that shall not be named, if reality telly about people cracking on isn't your thing, there are always other options.

Like reality TV about rich people dropping a load of cash on their new gaff.

You really do love to see it.

The two-part series documents Dermot's renovations of his own home in Dublin, following the man and his team from when they started working on the building in late 2018.

Part one didn't spare any drama, as everybody's favourite architect admitted that he had lost "all concept" of how big a house was supposed to be. 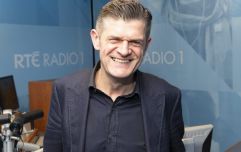 END_OF_DOCUMENT_TOKEN_TO_BE_REPLACED

He also panicked about the budget, added more money to the budget, considered packing the whole thing in and generally just looked a bit stressed, really.

It was optimum viewing for anybody who's a fan of home renovations or celebrities feigning worry for the benefit of the audience - and tonight is set to be no different as Dermot finally unveils his home to the country.

And spoilers: it's probably going to be very nice indeed.

Room To Improve: Dermot's Home continues tonight at 9.35pm on RTÉ One.


popular
Ireland's best places to work for 2020 have been revealed
Interactive infographic shows real-time spread of coronavirus outbreak
Here's Week 21 of JOE's 19 in 90 quickfire quiz
QUIZ: What movie/TV show are these fictional sports teams from?
Gardaí investigating shooting at a house in North Dublin
Six dead following mass shooting in Milwaukee
Emirates is recruiting new cabin crew members in Galway for tax-free jobs
You may also like
2 weeks ago
RTÉ are looking for single people to take part in season two of Pulling with my Parents
2 weeks ago
RTÉ journalist and broadcaster Keelin Shanley has died, aged 51
4 weeks ago
RTÉ's new documentary series will focus on some of the most trailblazing women in Irish history
1 month ago
New Angela Scanlon show to fill Saturday night slot on RTÉ
1 month ago
Sinn Féin is "taking legal advice" due to being excluded from RTÉ leaders' debate
1 month ago
These were the most watched TV programmes in Ireland last year
Next Page