"I mean, who can get more laughs out of one unzipping?"

The Borat sequel took home two Golden Globes at this year's ceremony, one for best actor in a musical or comedy for Cohen, and another for best comedy or musical film. 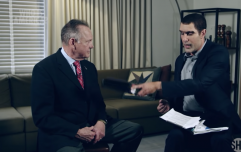 END_OF_DOCUMENT_TOKEN_TO_BE_REPLACED

During his first acceptance speech of the night, called out the “all-white” Hollywood Foreign Press Association, which is the voting body behind the annual awards show.

He then thanked Rudy Giuliani for his efforts, which is understandable, as it was for former New York Mayor who really stole the show in the Borat sequel.

"This movie couldn’t have been possible without my co-star," Cohen began. "A fresh new talent who came from nowhere, and turned out to be a comedy genius. I’m talking, of course, about Rudy Giuliani.

"I mean, who can get more laughs out of one unzipping?"

The controversial scene with Giuliani saw him interviewed by an actress playing Borat's "teenage" daughter in a hotel room. 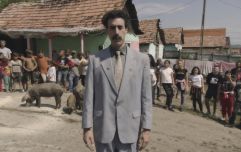 END_OF_DOCUMENT_TOKEN_TO_BE_REPLACED

They then move to a different room for a drink at her suggestion, where Giuliani puts his hands down his trousers.

Giuliani has defended his actions, claiming he was tucking in his shirt after removing recording equipment.

In his second speech for his best actor win, Baron Cohen poked fun at an even more high profile politician, saying: "Hold on, Donald Trump is contesting the result."

If you want to check out the Borat sequel or any of the other Golden Globes winners at home, all the details can be found here.

popular
Here's how to make €9-11 on Revolut in just a few minutes
Green Party representative calls for a temporary ban of stag and hen parties in Ireland
Pop Idol star Darius Campbell Danesh has died, aged 41
Off-duty Garda arrested in Tipperary on suspicion of drink driving
QUIZ: You won't be able to correctly guess the meaning of all these words
Murder investigation launched following death of 75-year-old woman in Kerry
Dublin Bus passenger assaulted in suspected homophobic attack
You may also like
1 year ago
Sacha Baron Cohen calls for Donald Trump to be banned from social media permanently
1 year ago
The JOE Movie Quiz: Week 72
1 year ago
Borat tries to kill COVID with a frying pan in the hilarious first trailer for sequel
1 year ago
Borat 2 is coming to Amazon next month, ahead of the US election
2 years ago
Sacha Baron Cohen is getting rave reviews for his performance in Netflix's new show
2 years ago
WATCH: Trailer for new Sacha Baron Cohen spy series released
Next Page