She has been the co-presenter of the show since 2017.

Sandi Toksvig has announced that she is leaving Great British Bake Off after three seasons on the show.

She is leaving the show to focus on other work projects, which includes hosting the forthcoming Channel 4 series The Write Offs, which looks at the issue of adult literacy.

In a statement released on Thursday morning, she said that working on the show "has been one of the great pleasures" of her life.

Channel 4 are now looking for a new co-presenter of the show, saying must they have experience of mopping up spills, the occasional tear, making tea and keeping the amateur bakers to time.

You can read Toksvig's statement in full here:

"When stepping down from a job it is quite common for people to say they are doing so in order to spend more time with their family. 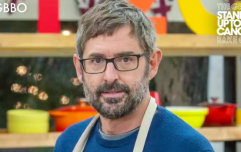 END_OF_DOCUMENT_TOKEN_TO_BE_REPLACED

"Unusually I am departing from the Great British Bake Off so I can spend more time with my other work. As my waistline will testify, Bake Off is an all-consuming show. Spending time with Prue, Paul and Noel has been one of the great pleasures of my life.

"These are friendships which I know will continue beyond the confines of television. Bake Off is a wonderful programme which has already proved it can happily withstand a change of hosting personnel.

"The reason for that, of course, is that the true stars of the show are the bakers themselves. I wish everyone well."


popular
Over 200,000 people have signed petition demanding change in how media treats those in the public eye
A man has died following an incident at a Dublin shooting range
BBC will show an 'immensely powerful' documentary about The Troubles tonight
THE JOE Movie Quiz: Week 41
QUIZ: Can you get full marks in our Top Boy quiz?
Storm Dennis washes ghost ship up on to Cork shore
QUIZ: How well do you know The Wedding Singer?
You may also like
3 months ago
There's a Derry Girls/Great British Bake Off crossover going down this Christmas
1 year ago
Personality Test: Which 2018 GBBO contestant are you?
1 year ago
Viewers had a brilliant reaction to the Biscuit Selfie challenge on the Great British Bake Off
1 year ago
Netflix's answer to The Great British Bake Off has viewers absolutely cracking up
2 years ago
The new Great British Bake Off hosts have been announced and it's confusing to say the least
3 years ago
Everyone's a fraud: Bake Off judges Mary and Paul don't do the technical bakes on the show
Next Page