There was a very strong reaction to David Attenborough's newest documentary

#SevenWorldsOnePlanet has taken audiences by storm on Sunday evening.

Sunday evening produced a drama-filled day of Premier League action, with Liverpool and Manchester United picking up wins, while Arsenal were held to a draw by Crystal Palace.

But while many people were on the edge of their seats watching the sport, others sat back and marveled at yet another excellent David Attenborough documentary. 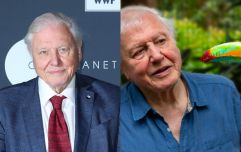 END_OF_DOCUMENT_TOKEN_TO_BE_REPLACED

#SevenWorldsOnePlanet aired on BBC One, and as is almost always the case with Attenborough-created documentaries, people loved it.

The first episode of the seven-part series followed the continent of Antarctica, while occasionally making reference to the ongoing climate emergency, but for the most part just showing nature at its most incredible.

And if you missed it, don't worry - the BBC have for some reason released a compilation of dozens of penguins ... doing their business, and added it to some cheerful music.

Take a look, unless you happen to be eating your dinner at the minute...

Naturally, people took to Twitter to praise the first episode of the show:

#SevenWorldsOnePlanet already has all the hallmarks of classic #DavidAttenborough. Cute baby penguins, stunning scenery and the soothing tones of Sir David. With a clear and sombering message 'This may be the most critical moment for life on Earth since the continents formed'. pic.twitter.com/SxEGjj2Jql

Truly outstanding and shocking television. We have all got to do whatever we can to save this incredible and beautiful planet and the animals on it. Thank you @BBCOne for this programme. #SevenWorldsOnePlanet

I don’t know about you but we are all in tears here. This really is a crisis for the 🌍 all the evidence in this phenomenal documentary. @BBCOne #SevenWorldsOnePlanet pic.twitter.com/ndp1ZmSlxy

That atmospheric music, David Attenborough’s soothing voice, the stunningly beautiful photography and of course, the star of the show, our beautiful world. This is what Sunday nights were made for #SevenWorldsOnePlanet

David Attenborough could narrate terms and conditions and I'd listen to every single word #SevenWorldsOnePlanet pic.twitter.com/qv2M63UD8C

Each episode of the show will focus on a different continent, with Attenborough and his crew taking a closer look at Asia next week.

The Big Reviewski || JOE · Matt Damon, Camille Cottin, Abigail Breslin and director Tom McCarthy discuss new drama Stillwater
popular
Met Éireann issues weather warning for entire country ahead of week of thunder and flooding
CMO says it's "important to remember" infections in vaccinated people doesn't mean vaccines don't work
The 50 most iconic songs of all time* have been revealed
People think they've figured out the ranking of the viewers on your Instagram Stories
QUIZ: Test your all round wisdom with this general knowledge quiz
PICS: The man with the biggest penis in the world has one unbelievable problem with it
Netflix unveils its full list of classic movies arriving throughout August
You may also like
7 months ago
Sir David Attenborough 'punched the air' when Donald Trump lost the presidential election
9 months ago
Extinction Rebellion attempt to confront David Attenborough at his home after he criticised the group
1 year ago
David Attenborough says now is our "last chance" to address climate change
1 year ago
David Attenborough says 'the moment of crisis has come' in relation to climate change
1 year ago
WATCH: David Attenborough tells Greta Thunberg she has "woken up the world"
1 year ago
David Attenborough to make a new five-part documentary for the BBC
Next Page