"Everybody has a dark side. Some of us are better at hiding it than others."

Based on the best-selling novel by Darcey Bell, the upcoming adaptation of A Simple Favour will be a big hit for fans of those big hit mystery thrillers like Gone Girl and The Girl On The Train.

The story is simple enough, kicking off with a widowed mommy blogger Stephanie (Anna Kendrick - Pitch Perfect, Up In The Air) as she befriends an impossibly glamorous new arrival Emily (Blake Lively - Gossip Girl, The Shallows) in their small town. 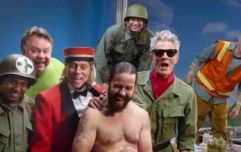 END_OF_DOCUMENT_TOKEN_TO_BE_REPLACED

They very quickly become best friends, and one day Emily simply disappears, leaving behind a husband and young son, and - of course - Stephanie, who takes it upon herself to help out with the investigation of her missing friend, and soon discovers that she didn't know this woman as well as she thought she did...

While that all sounds fairly standard for a mystery (half of us are already thinking the husband did it, and the other half are probably thinking Stephanie herself did it), the big surprise here is that Paul Feig has taken on directing and adapting duties, as his usual penchant for comedies - he's the guy behind Bridesmaids, Spy, The Heat and some of the best episodes of Arrested Development - means that he may be coming at this story with a very unique point of view.

A Simple Favour arrives in cinemas here from Friday 21 September, and you can check out the trailer right here:

The Big Reviewski || JOE · TBR Spotlight: Loki - Episode Six - 'For All Time. Always.'
popular
QUIZ: Ignite your brain cells with this testing general knowledge quiz
Professor suggests Garda checkpoints at Irish border to halt spread of Delta variant
The JOE Movie Quiz: Week 112
Sunshine and high temperatures to come to an end as Met Éireann predicts week of thunder and rain
Paul Reid confirms over 68% of the adult population are now fully vaccinated
The JOE Friday Pub Quiz: Week 253
The JOE Music Quiz: Week 67
You may also like
4 days ago
WATCH: The first trailer for The Last Duel, the epic film Matt Damon made in Ireland
2 weeks ago
Five great new trailers you might have missed this week
2 weeks ago
The King's Man trailer takes us back to the World War One origins of the spy agency
2 weeks ago
WATCH: Roy family goes to war in first trailer for Succession season three
3 weeks ago
Five great new trailers you might have missed this week
1 month ago
Christmas comes early for gamers as FIVE big trailers are dropped this week
Next Page