Sin City is coming back as a TV show

A series to kill for.

It may not have aged spectacularly well, but the big screen adaptation of Sin City felt somewhat revolutionary when it happened along in 2005.

Coated in stylised black-and-white, laced with throwaway ultra-violence and boasting an impressive cast of eye-catching characters, the movie registered as an instant cult favourite. 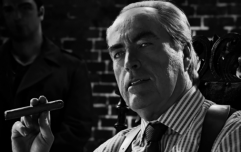 END_OF_DOCUMENT_TOKEN_TO_BE_REPLACED

Despite doing only alright - $160 million all told - a sequel was given the green light, with 2014's Sin City: A Dame to Kill For landing with a thud as a box office and critical bomb. With that, Frank Miller's graphic novel property seemed done and dusted.

Deadline reports that Legendary Television has officially closed a deal with Miller to resurrect Sin City as a television series. Furthermore, director Robert Rodriguez, who helmed the 2005 film alongside Miller, is said to be a close to a deal to return in an executive producer capacity.

It is unclear if the pair will step behind the camera again, but a first season of the show is essentially guaranteed so long as a TV network or streaming platform takes an interest.

As part of the deal, an adult-focused animated Sin City prequel series will also be put into production.

popular
5 years ago, Hollywood took a massive gamble on a huge sequel... and lost big time
QUIZ: We bet you can't get full marks in this extremely frustrating geography quiz
Woman dies from hypothermia after telling doctor she 'couldn't afford heating'
Nicola Bulley's phone found by the river 'could be a decoy', diving expert suggests
An incredibly fun action blockbuster is among the movies on TV tonight
One of the best crime thrillers ever is among the movies on TV tonight
The Last Of Us Episode Five will premiere days earlier in Ireland and UK
You may also like
8 years ago
Video: Sin City recreated as an 8-bit video game is brilliantly O.T.T violent
8 years ago
Video: Eva Green stars in the Sin City 2 Red Band trailer deemed "too hot" for TV (NSFW)
8 years ago
Video: The new red band trailer for the new Sin City movie is awesome
8 years ago
Video: Trailers don’t come much sexier or more stylish than the one for the new Sin City movie
8 years ago
Video: The first trailer for Sin City: A Dame To Kill For is all sorts of exciting
5 days ago
Steve-O says he cannot save 'dying' Bam Margera in emotional online post
Next Page