WATCH: Everything old is new again in the first trailer for Star Trek: Picard

"Be the captain they remember."

There has been much excitement and anticipation ever since it was announced last summer than Patrick Stewart was reprising his iconic role of Jean-Luc Picard in a new TV show.

After what felt like a long wait, we finally have the first proper look at Star Trek: Picard, and the initial teaser presents much for fans to latch onto. 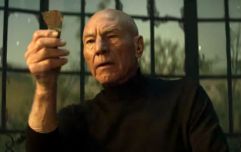 WATCH: Two of Star Trek's biggest baddies are back for Picard Season 2

END_OF_DOCUMENT_TOKEN_TO_BE_REPLACED

You have the likes of Data and Seven of Nine popping up and, of course, the enjoyment of seeing Stewart step back into one of his most beloved characters.

It's hard not to feel some Logan vibes off of this, especially in the early going, but Picard is a different beast altogether.

As for the plot, it would seem that the veteran captain has little choice but to help a mysterious young girl who either holds the key to salvation or complete destruction, depending on who you ask.

It all looks very exciting, anyway. The show arrives on Prime Video in 2020.

Check out the first official trailer below.

The Big Reviewski || JOE · The Big Reviewski with Y: The Last Man, that Malignant ending & a secret streaming service
popular
All of the restrictions easing from tomorrow as Ireland continues to reopen
The Big Reviewski JOE Movie Quiz: Week 120
The JOE Friday Pub Quiz: Week 261
Kerry Lotto player one number shy of winning third highest jackpot in Irish history
QUIZ: Give your brain the pump it deserves with this general knowledge quiz
New documentary on the murder of Limerick man Jason Corbett to air tomorrow night
Daniel Craig says goodbye to James Bond in emotional farewell speech
You may also like
1 year ago
The creators of Star Trek: Picard put to rest one of the biggest fears fans might have about the show
1 year ago
The creators of Star Trek: Picard discuss the very strong Irish connection to the new show
2 years ago
EXCLUSIVE: Brad Pitt and Margot Robbie are on board for joining Tarantino's Star Trek movie
2 years ago
William Shatner is heading to Ireland for a special Q&A screening of Wrath Of Khan
2 years ago
Tarantino says his Star Trek movie will basically be "Pulp Fiction in space"
2 years ago
The plot has been revealed for the new Star Trek series starring Patrick Stewart
Next Page