He also revealed what song he's singing on an upcoming Carpool Karaoke with Richard Madden.

Taron Egerton truly is one of the most exciting younger talents in Hollywood right now.

From playing the reluctant hero in the Kingsman movies, to being a loveable fool in Eddie The Eagle, to blowing us all away with his amazing singing voice in Sing, he truly is one to watch.

END_OF_DOCUMENT_TOKEN_TO_BE_REPLACED

So it should be no surprise that Elton John himself singled out Egerton to play him in the new biopic of his life, Rocketman.

We're not overstating this when we say that Egerton absolutely deserves all of the awards attention when it comes to Oscar and Golden Globe season, as he is phenomenally good in the role.

When JOE sat down with him to discuss his role in the movie, we chatted about everything from his karaoke choice (and the song he has picked for his upcoming Carpool Karaoke with Richard Madden), to his opinions on the strong reaction to the LGBTQ content in the movie, to another major rock star he could potentially play next.

Oh, and yes, feeling sexy in his hot pants. 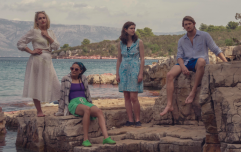 END_OF_DOCUMENT_TOKEN_TO_BE_REPLACED

We were also lucky enough to chat to Bryce Dallas Howard, who plays Elton's mum in the new biopic (you can watch that interview here), as well as the movie's director Dexter Fletcher (interview here).

Meanwhile, Rocketman is in Irish cinemas right now, and you can check out the trailer below:

popular
Eurovision producers reveal "irregular voting patterns" during Saturday night's final
One of Liam Neeson's best ever performances is among the movies on TV tonight
QUIZ: Try out one of our trickiest General Knowledge Quizzes yet
One of the longest lunar eclipses of the decade will be visible in Ireland tonight
Where will 2023's Eurovision be held if Ukraine can't host?
QUIZ: True glory awaits if you can 100% this General Knowledge Quiz
REVIEW: Van Gogh Dublin is a truly unique cultural experience
You may also like
11 hours ago
QUIZ: Can you name the disaster movie from a single image from each disaster
23 hours ago
The JOE Movie Quiz: Week 154
1 day ago
The long-awaited Avatar sequel and 6 more big trailers you might have missed this week
1 day ago
A very funny buddy action comedy is among the movies on TV tonight
2 days ago
Arnie's best one-liners are found among the movies on TV tonight
2 days ago
Much-loved character actor Fred Ward has died, aged 79
Next Page