#TRAILERCHEST: Damon, Clooney and The Coen Brothers get violent in Suburbicon

Welcome to #TrailerChest, where we're taking a sneak peek at the brand new trailer for Suburbicon. 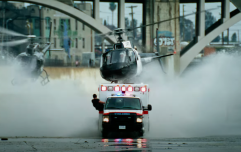 END_OF_DOCUMENT_TOKEN_TO_BE_REPLACED

Plot's it all about? Damon stars as loving father and husband Gardner Lodge in the idyllic town of Suburbicon in the summer of 1959.

When his wife is violently murdered during a home invasion, he asks his sister Margaret (Julianne Moore) to move in with them to look after his son, while he tries to untangle his family from the violent retributions of the local gangsters, who seem to be fronted by the charismatic Roger (Oscar Isaac).

While that all sounds very dangerous and thriller-y, it is actually being pitched as a comedy, co-written by none other than The Coen Brothers (The Big Lebowski, No Country For Old Men), who shared scripting duties with the movie's director, who is none other than George Clooney, returning to behind-the-camera work for the first time since 2014's The Monuments Men.

Released right in the middle of Oscar-season, this is either aiming high for some awards attention, or hoping to get some counter-programming money, as it hits cinemas one week after massive blockbuster Justice League arrives.

The Big Reviewski || JOE · The Big Reviewski's HALLOWEEN SPECIAL with Jamie Lee Curtis and spooky movie recommendations
popular
New nightclub restrictions include one metre social distancing at bars
New true crime documentary series from Netflix looks gripping
Irish costume shop criticised for selling Nazi uniform as Halloween outfit
Nearly a third of young people intend to emigrate in the next 12 months, new survey reveals
An excellent drama starring Jake Gyllenhaal is among the movies on TV tonight
Here's the lineup for this week's Late Late Show
WhatsApp to stop working on 53 phone models, including iPhone 6
You may also like
1 week ago
All the trailers dropped by DC: The Batman, The Flash, Shazam, Aquaman, Peacemaker and more
2 weeks ago
The new Paranormal Activity and 5 more big trailers you might have missed this week
1 month ago
WATCH: The full trailer for The Matrix Resurrections is here to blow your socks off
1 month ago
WATCH: Deadly Cuts takes hairdressing in Dublin to murderous new heights
1 month ago
WATCH: The first trailer for Red Notice is here, Netflix's biggest ever movie
2 months ago
WATCH: American trailer for new Irish drama series Kin is epic and action-packed
Next Page