Surviving R. Kelly creator "had no idea" the documentary would have the impact it did

The R&B singer is currently in jail.

In December of 2018, Lifetime aired a docu-series entitled Surviving R. Kelly, which dealt with years of accusations of sexual abuse against R&B star R. Kelly.

The series was Emmy-nominated and had real-world consequences, with Kelly being arrested and formally charged with 10 counts of aggravated criminal sexual abuse. 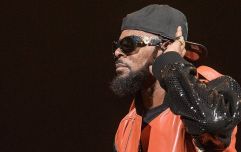 The sequel to Surviving R. Kelly is coming very soon

END_OF_DOCUMENT_TOKEN_TO_BE_REPLACED

Since then, Kelly has been charged with multiple other crimes, including federal sex trafficking. He is currently in jail awaiting trial.

In a recent column in The Hollywood Reporter, filmmaker Dream Hampton spoke about how she did not expect the reaction to the docu-series.

She said: "I had no idea Surviving R. Kelly would have any impact. Even after the #MeToo moment was costing powerful men their careers and reputations, Jim's reporting still seemed like screams into the void.

"While we were in production, the BBC aired a doc that featured some of the women in our project. It didn't move the needle. Still, we kept our heads down and told a story that needed six episodes, two more than we'd planned. We worked to center the survivors, to give them space to unpack their stories with dignity."

She continued: "My highest hope was the work would offer narrative support and serve as a tool to the organizers and advocates who spend their lives fighting for justice for black girls and women who've survived gender and sexual violence. R. Kelly earned the reckoning he's experiencing.

"But the real breakthrough is the brave way his survivors shared with us. They are imperfect women with complicated lives, and through their courage we are having incredibly difficult conversations about a kind of violence we've avoided confronting for too long."

It was recently announced that a Surviving Jeffrey Epstein documentary series would be released, although the project is still in its early stages.

The Big Reviewski || JOE · The Big Reviewski with Andy Serkis, Squid Game follow-ups & the return of Succession
popular
Gardaí investigating after man robs hotel at knife point in Kerry
QUIZ: Can you master this General Knowledge Quiz?
The JOE Friday Pub Quiz: Week 265
QUIZ: Get your quiz on with this General Knowledge Quiz
Investigation launched after window smashed at Canada Goose store in Dublin
The JOE Movie Quiz: Week 124
The 10 best insults from the first two seasons of Succession
You may also like
2 years ago
R. Kelly to stand trial next year
2 years ago
A new Lifetime documentary on R. Kelly will air next month
2 years ago
Judges will allow cameras in the courtroom for R. Kelly's sex abuse trial
2 years ago
WATCH: The parents of one of R. Kelly's live-in girlfriends discuss his relationship with their daughter
2 years ago
A third R. Kelly sex tape has been uncovered and turned over to authorities (Report)
2 years ago
R. Kelly pleads not guilty to 10 counts of aggravated sexual assault
Next Page