The terrifying hidden gem comes from the makers of Breaking Bad.

Jared Harris (Mad Men, Sherlock Holmes), Ciaran Hinds (Game Of Thrones, The Woman In Black), Tobias Menzies (Casino Royale, Outlander) and producer Ridley Scott all team up on The Terror, one of the best shows from 2018 that pretty much nobody outside of the States got to enjoy.

Set in 1848, the show tells the story of two real life warships, HMS Terror and HMS Erebus, sent on a Royal Naval expedition to find the treacherous Northwest Passage.

Both ships soon become trapped in ice near the Arctic and the captains and crew on board face starvation, mutiny, cannibalism... and something much worse which we won't get into here.

The great thing about The Terror is that the fear sets in before anything truly terrible happens, as the men on board the ships are forced to face their impending doom, before something arrives to speed that doom right along.

The trailer does a pretty good job of setting up the unique horror in store for those who decide to take a chance on the show: 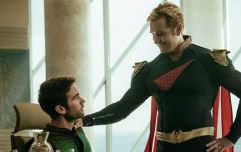 Here's your first, violent look at The Boys season two

END_OF_DOCUMENT_TOKEN_TO_BE_REPLACED

The show initially aired in the States in March 2018, and while it was made available to certain viewers on this side of the pond, it was only those with access to the AMC channel, which meant you needed to be a subscriber of BT as your service provider.

Now, FINALLY, all of Season One of The Terror has been added to Amazon Prime for Irish viewers to enjoy!

And once you've got it all watched, we've got even more good news, as Season Two has already been filming and is set for release later in 2019.

The Hollywood Reporter broke the news that the new season will take place on the west coast of the United States during World War II, and according to the press release, it will "center on an uncanny specter that menaces a Japanese-American community from its home in Southern California to the internment camps to the war in the Pacific".


popular
Donald Trump takes aim at Parasite's Oscar win because the movie is from South Korea
QUIZ: How well do you remember these classic PS2 games?
Here are all the best new titles coming to Netflix in March
New weather warning issued for three counties
Laura Whitmore hits out at paparazzi photographing her following Caroline Flack's death
Mary Lou McDonald wins most votes, but no Taoiseach elected after first sitting of 33rd Dáil
Gardaí search for owner of "quantity of gold Krugerrands" in Limerick
You may also like
6 months ago
Simon Pegg and Nick Frost to team up again on new TV show
10 months ago
WATCH: Too Old To Die Young looks like Breaking Bad meets Drive
1 year ago
The documentary series about the wife who cut her husband's penis off is now available to watch
1 year ago
2018's best and scariest movie is now available to stream
1 year ago
New documentary series from director of Get Out tells the story of one of the infamous crimes ever committed
1 year ago
Interviewing Julia Roberts, quite possibly the most charming person in Hollywood
Next Page