The Westworld and Thor: Ragnarok actress doesn't hold back here.

Tessa Thompson is proving to be one of the best new things to hit Hollywood in recent years.

While successfully mixing up her CV with small, important indie gems and huge blockbusters, here future is looking particularly bright.

END_OF_DOCUMENT_TOKEN_TO_BE_REPLACED

While we sat down with the Creed II actress to chat about the boxing sequel, we also discussed the fact that two of her next big projects see her working with two of Ireland's best talents, starring with Liam Neeson in the untitled Men In Black sequel, and Ruth Negga in powerful drama Passing.

That conversation ended up with Tessa attempting an Irish accent (which needs to be heard to be believed), but before then, we also discussed the cliche of the girlfriend role in boxing movies, which is something so prevalent that it has its own recurring character on Saturday Night Live.

So we had to ask, did Tessa have a hand in making sure her character Bianca didn't go down that road too:

"It was all hands on deck. It was important to me, from the first film, Ryan Coogler (writer and director of the first Creed movie) and I had so many conversations about that, and we really wanted to try to buck convention in that space.

"So often women are tasked with - not just in boxing movies, but just in movies in general - I won't say which, but I was watching a film last night on the plane and I was just like... Man, women! We just show up in movies to function to support the male character in ways. Like, we die for them, we live for them, it's just obnoxious actually!

"We wanted to do something different with [Bianca], so we tried to do that."

You can see the full chat with Tessa Thompson right here: 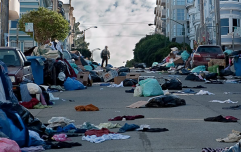 END_OF_DOCUMENT_TOKEN_TO_BE_REPLACED

Elsewhere, you can check out our review of Creed II right here, as well as our chats with the movie's director Steven Caple Jnr. (right here), and our exclusive chat with Dolph Lundgren and his on-screen son Florian Munteanu as they talk about the potential Drago spin-off.

The Big Reviewski || JOE · The Big Reviewski with Y: The Last Man, that Malignant ending & a secret streaming service
popular
You could be shopping in an Aldi store with no checkouts in Ireland in the near future
Cash, Rolexes, cars and one Canada Goose jacket seized in major Garda raid
Man (40s) in critical condition following serious road collision in Cork
Government announces special €1,860 payment for laid-off workers during pandemic
New special payment for workers laid off during pandemic - Who is eligible and what are they entitled to?
QUIZ: Can you 100% this tricky Oasis quiz in just three minutes?
Men arrested trying to cross New Zealand border with boot full of KFC
You may also like
1 day ago
A fantastic Tom Hanks performance is among the movies on TV tonight
1 day ago
WATCH: Margaret Thatcher was briefly resurrected at the Emmy Awards
1 day ago
Midnight Mass review: Netflix's new series is a slow-burn drama ending in all-out horror
2 days ago
New documentary on the murder of Limerick man Jason Corbett to air on Monday night
2 days ago
Ranking Daniel Craig's James Bond movies from worst to best
2 days ago
The Big Reviewski JOE Movie Quiz: Week 120
Next Page