TG4 pulled another Hallowe'en prank live on air on Tuesday

Anyone who tuned into TG4 on Hallowe'en night last year received a proper fright as weather presenter Caitlín Nic Aoidh appeared to be struck by lightning live on air.

It was a great prank played by the broadcaster last year and it made waves across social media with the likes of Dara Ó Briain tweeting about it at the time. 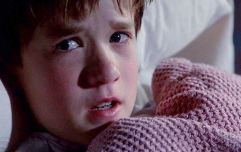 END_OF_DOCUMENT_TOKEN_TO_BE_REPLACED

Well, they weren't about to let this Hallowe'en pass without marking the occasion following the success of last year.

Caitlín Nic Aoidh was once again the instigator, but this one was rather less shocking then last year and more playful.

In a nod to the social media which has consumed everybody, they used some Snapchat filters on Caitlín during the broadcast... voice modifiers and all.

House of Rugby Ireland · Munster's nail-biting win, European games in doubt and Darren Cave interview
popular
The JOE Friday Pub Quiz: Week 226
Recall of Pedigree dog food over safety concerns
QUIZ: Can you correctly identify these European country flags?
QUIZ: Can you pass your driving test and guess the meaning of all these road signs?
QUIZ: Can you name the Marvel Cinematic Universe film from just a single screen shot?
QUIZ: Name all the counties of Ireland that contain 3 vowels or more
QUIZ: Can you guess the drink from its can?
You may also like
2 months ago
DSPCA offers tips to keep pets safe this Halloween
2 months ago
Rare "blue moon" will be visible over Ireland on Halloween night
2 months ago
No trick or treat? No problem, thanks to MunchDiddly's, Ireland’s new online sweet delivery service
1 year ago
Dublin Fire Brigade respond to a number incidents on Halloween night
1 year ago
Rocks thrown at Dublin Fire Brigade as they tried to extinguish bonfire
1 year ago
What your 2019 Halloween costume says about you
Next Page