One of the Gleesons features in the new comedy, which kicks off tonight.

"When I hear bisexual, I just hear lame slut..."

Queer As Folk changed the landscape for LGBTQ+ representation on the small screen, but Channel 4 will be bringing an often overlooked part of the sexuality minority community to the forefront with The Bisexual. 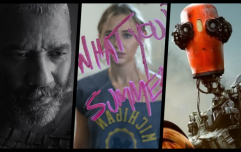 END_OF_DOCUMENT_TOKEN_TO_BE_REPLACED

Irish actors Brian (son of Brendan, brother of Domhnall) Gleeson, Eva Birthistle (Brooklyn) and Niamh Algar (The Drummer And The Keeper, From The Dark) star alongside Maxine Peake (Black Mirror) and Desiree Akhavan (Creep 2), all telling the story of the differences between dating men and women from the perspective of a person who finds herself doing both.

The plot synopsis for the show goes as follows:

"New Yorker Leila (Akhavan) is feeling lost in London. She had been one half of an uber-cool power couple with her business partner Sadie, but Leila has a secret - she has come to the realisation that she is bisexual and having split up with Sadie (Peake) she has moved in with Gabe (Gleeson), a neurotic novelist who is having relationship problems of his own.

"Gabe doesn't know many lesbians and Leila has not got much experience of hanging out with heterosexuals and together the housemates enter into an awkward partnership. Gabe becomes Leila's unlikely "wingman" helping her to navigate her new life dating men and women - in return she introduces wide-eyed Gabe to the queer scene while also trying to help him decipher his unreadable, sort-of girlfriend Francisca.

"As Leila comes to rely on Gabe she finds herself struggling to come out to her gay friends, while her business relationship with Sadie hangs in the balance."

The first episode of The Bisexual kicks off on Channel 4 tonight (Wednesday 10 October) at 10pm.

Check out the full trailer below:

The Big Reviewski || JOE · The Big Reviewski with Ray Liotta, Goodfellas facts & Tom Hanks making us cry
popular
The JOE Movie Quiz: Week 121
The JOE Friday Pub Quiz: Week 262
Temperatures to plummet to five degrees with thunderstorms as Atlantic system to hit next week
Ireland's newest train station officially opens in Dublin
PICS: The man with the biggest penis in the world has one unbelievable problem with it
QUIZ: Tickle your brain waves with this general knowledge quiz
The JOE Music Quiz: Week 74
You may also like
1 day ago
Netflix releases tense first look at Ozark's fourth and final season
1 day ago
One of the most iconic films ever made is among the movies on TV tonight
1 day ago
The five best true crime documentaries to watch on Netflix this weekend
1 day ago
Daniel Craig says he is thinking of retiring to Ireland
1 day ago
QUIZ: How well do you know the life and work of Denzel Washington?
1 day ago
How to watch Daniel Craig's 007 movies at home before No Time To Die arrives next week
Next Page