It's back in April. Let the theories begin.

Now that we've got our very first teaser trailer for Season 8 of Game of Thrones, it's time to start the theories and speculation.

Given the fact that Game of Thrones inspires more debate, analysis and fandom than any other show, part of the fun is trying to speculate on what we've just seen.

END_OF_DOCUMENT_TOKEN_TO_BE_REPLACED

Here are a few things we noticed from the teaser trailer.

As fans of the show will know, the trailer is filmed over the Dragonstone Painted Table of Aegon the Conqueror and as the camera pans over the territories, we see the freezing figurines in the North.

The direwolf, a dragon and then the entire realm of The North is consumed by the icy chill of the White Walkers.

END_OF_DOCUMENT_TOKEN_TO_BE_REPLACED

Moments later, a fire spreads from the South and the two elements collide in a battle of ice and fire. The flames engulf a Lannister lion and eventually the entire southern part of the map.

On this note, the situation for the Starks appears to be pretty grim due to the potential of Winterfell falling to the Night King and his dragon, Viserion.

The symbolism of the ice dragon suggests that Viserion (Night King's dragon) is about to do some serious damage to House Stark. 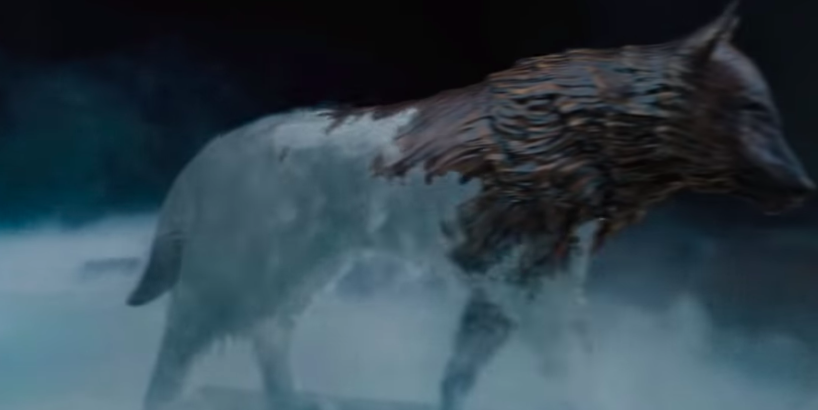 END_OF_DOCUMENT_TOKEN_TO_BE_REPLACED

Similarly, it should be noted that the crypts of Winterfell are also brimming with dead members of House Stark like Rickon and Lyanna (Ned's sister). Could they be new members in the army of the dead?

Elsewhere, the lion on fire isn't a good sign for Cersei and her unborn child. 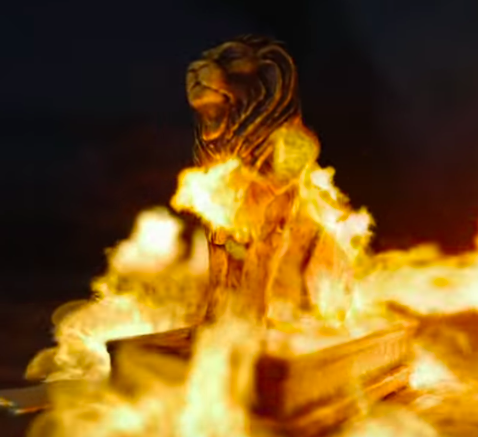 Now that Jaime has left her side, House Lannister is in danger of crumbling.

Aside from this, Tyrion is also the hand of her mortal enemy. Cersei's treachery against Daenerys at the end of Season 7 - she reneged on their alliance to combine forces to battle the White Walkers - is yet to be punished. Perhaps Casterly Rock or the Red Keep will meet the same fiery end as Harrenhal?

It's also worth remembering that Daenerys had that very significant vision in the House of the Undying. Remember when she saw the throne room absolutely destroyed with snow falling on the Iron Throne?

Bran also had a vision of a dragon flying over the Red Keep.

Is Dany about to go down the same road as her father and burn them all?

Speaking of Harrenhal, it's very significant that the swathes of ice and fire meet near the Trident. Of course, fans of the show will know that this location in the Riverlands is deeply significant.

After Rhaegear Targeryn (Jon's legitimate father) was killed at the Battle of the Trident - near Harrenhal, Riverrun, and the Twins - Robert Baratheon came to power, which set in motion the events in Game of Thrones.

Also, before the Seven Kingdoms were united under the Iron Throne, Torrhen Stark bent the knee to Aegon, his sisters and their dragons on the banks of the Trident.

Aegon the Conqueror burned the castle of Harrenhal and slaughtered its owners via his formidable dragon, Balerion the Dread.

Without getting into too much detail, after Torrhen Stark heard from his scouts that these dragons laid a fiery waste to Harrenhal and killed thousands of men at the Field of Fire, he had no choice but to bend the knee, thus ensuring a fateful union between ice (House Stark - Kings of Winter) and fire (House Targareyn - Fire and Blood).

There's also a passage in A Storm of Swords where Daenerys has a vision that she's riding into the Trident. Here it is in full.

"That night she dreamt that she was Rhaegar, riding to the Trident. But she was mounted on a dragon, not a horse. When she saw the Usurper’s rebel host across the river they were armored all in ice, but she bathed them in dragonfire and they melted away like dew and turned the Trident into a torrent. Some small part of her knew that she was dreaming, but another part exulted. This is how it was meant to be. The other was a nightmare, and I have only now awakened."

It's a very significant location and the perfect place for the final battle to commence.

When the forces of ice and fire actually collide, a crystal-like substance emerges.

This could be dragonglass, or obsidian, being formed from the collision of these elements. Of course, dragonglass is called frozen fire and with these two elements battering against each other, this could suggest the creation of a 'new wall'.

Given that the White Walkers are killed by dragonglass, this could be a very decent barrier to protect the realms of men from their threat.

It's time to watch that trailer again.

popular
The JOE Friday Pub Quiz: Week 308
Pilots fly over destination airport at 37,000 feet because they were both sleeping
Multiple fatalities after planes collide mid-air over California airport
Netflix has just added 23 very big movies to its library
Passenger plane dropped 1,200 feet in a minute without pilots noticing
Here's how to make €9-11 on Revolut in just a few minutes
People want "offensive" Crown Paints advert banned after attracting hundreds of complaints
You may also like
1 day ago
Netflix has just added 23 very big movies to its library
1 day ago
The prequel to one of the best twists of all time and 7 more movies & shows to watch this weekend
2 days ago
WATCH: The full trailer for Cobra Kai season 5 has landed
5 days ago
QUIZ: Match The Simpsons quote to the character who said it
1 week ago
Disney+ has just added 10 big movies to its library
1 week ago
Breaking Bad and Better Call Saul creator reportedly has next new show lined up
Next Page