"Talk me through your very scary scenario..."

Well, here at JOE HQ we're huge fans of the Jack Ryan films of the 1990s (The Hunt For Red October, Patriot Games, Clear And Present Danger) and now we're worried that this new incarnation won't live up to expectations – THAT's our very scary scenario.

We brought you the first trailer for Jack Ryan: Shadow Recruit a couple of weeks back, and this morning Paramount Pictures have released their second exclusive clip.

END_OF_DOCUMENT_TOKEN_TO_BE_REPLACED

Mainly because trying to wear three pairs of shoes at once is pretty difficult. Believe us, we’ve tried.

Pine is Ryan, a young CIA analyst who was "promised an office job" but is instead led into the big bad world of espionage by his shadowy supervisor, played by Kevin Costner.

This time around there is some more footage of what appears to be Ryan's efforts to thwart an assassination attempt at the hands of Notorious B.I.G., something he achieves by mainly closing lots of doors in his attacker's face. Great CIA tactics there...

The film also stars Keira Knightly as Mrs Ryan but, for JOE, the most exciting aspect is the double presence of Irishman Kenneth Branagh who is on board as both the director of the film and as Jack Ryan’s nemesis, the Russian Viktor Cherevin.

The trailers are looking good so far so we’ve got everything crossed that this new incarnation of Jack Ryan will be just as thrilling as those previous films.

Don’t let us down please:

Jack Ryan: Shadow Recruit is scheduled for release in Ireland on 26th December 2013. 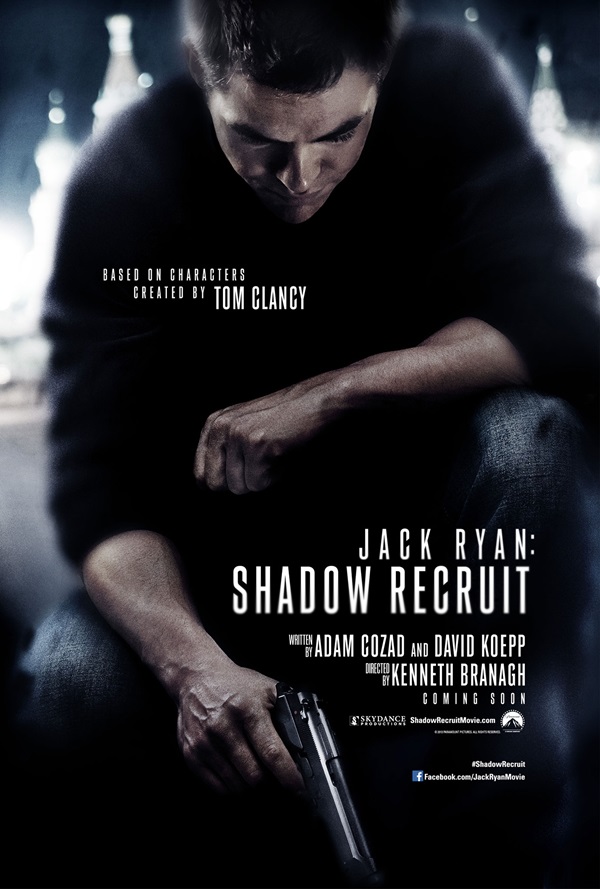 The Big Reviewski || JOE · The Big Reviewski with Andy Serkis, Squid Game follow-ups & the return of Succession
popular
PICS: The man with the biggest penis in the world has one unbelievable problem with it
The JOE Friday Pub Quiz: Week 265
The 50 most iconic songs of all time* have been revealed
A scene by scene analysis of the most uncomfortable moment in Come Dine With Me history
Ryanair is seeking applicants for "the worst job in Ireland"
Warning after person has bank account cleared out hours after scam text
People born in April are officially the sexiest, study finds
You may also like
2 days ago
The stars of The Hangover remember the Irish premiere after-party
2 days ago
5 of the best 2021 movies and shows on Disney+ you might have missed
3 days ago
20 years ago this week we got cinema's best jump-scare of all time
3 days ago
"We've all lost people": Jamie Lee Curtis on Ellen Ripley, Sarah Connor and her iconic Laurie Strode
4 days ago
Jamie Lee Curtis announces plans for 2022 Halloween movie festival in Ireland
4 days ago
Halloween Kills review: One of the most violent horror movies Hollywood has made in years
Next Page