Dave Grohl performed a special version of 'Blackbird' by the Beatles in a poignant Oscars In Memoriam tribute.

Hollywood has mourned the loss of several esteemed names over the past 12 months, including David Bowie, Christopher Lee and Alan Rickman.

Grohl's subdued acoustic performance of this brilliant Beatles song was particularly moving, especially following his recent revelation about a conversation he had with Bowie regarding a potential collaboration. 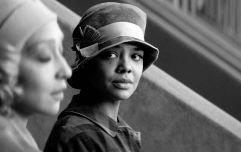 END_OF_DOCUMENT_TOKEN_TO_BE_REPLACED

Grohl recently said, "about two years ago, I got approached by this movie to do a song for the movie, so I thought, 'Maybe I'll have someone else sing, I'll do the music and then have another vocalist.' And then I thought, "Maybe I'll ask and see if David would want to do it.'

"So the next day I get an email and it says, 'David, I watched the movie and I got to be honest, it's not my thing.' He said, 'I'm not made for these times.'"

Grohl replied, thanking Bowie for his time, before the British singer responded: "Alright, now that's settled then, f*ck off."

The Foo Fighters frontman couldn't tell if it was a joke, so followed up, "see you in another 16 years", referring to the pair last meeting up at Bowie's 50th birthday.

But Bowie ended on a poignant note, telling Grohl, "don’t hold your breath... no more birthdays, I’ve run out of them... but that was a really fun night, wasn’t it."

popular
WATCH: Storm Barra batters Irish coast in startling footage from lighthouse keeper in Cork
Woman killed in Clare crash named as Peggy Twomey, mother of Marty Morrissey
Amazon Prime Video has quietly added 8 big new movies to its library
These are the most generous counties in Ireland, according to GoFundMe
Pedestrian in his 40s dies after road crash in Tipperary
Ant & Dec call out Boris Johnson over Downing Street Christmas party
A fun action flick with Nicolas Cage is among the movies on TV tonight
You may also like
7 months ago
The Ultimate Oscars Quiz
7 months ago
Six-time Oscar-nominated drama Sound Of Metal is available to watch at home right now
1 year ago
Parasite is coming to loads more Irish cinemas following Oscar success
1 year ago
Joaquin Phoenix pays tribute to brother River in Oscar acceptance speech
1 year ago
Oscars 2020: Here's how you can watch the Academy Awards tonight
1 year ago
Adam Sandler's speech at the Independent Spirit Awards is excellent
Next Page