"I can't believe a f*cking sorority just moved next door."

Mac and Kelly Radner are back.

Following on from 2014's Bad Neighbours, Seth Rogen and Rose Byrne return as the happy couple who aren't actually that happy about the fact that Chloë Grace Moretz and her sorority sisters have moved in next door, making their life a living hell.

They're Bad Neighbours you see. Get it?

This time around, however, the Radners are counting on Zac Efron's Teddy Sanders and his INCREDIBLE 48-PACK ABS to come to the rescue. 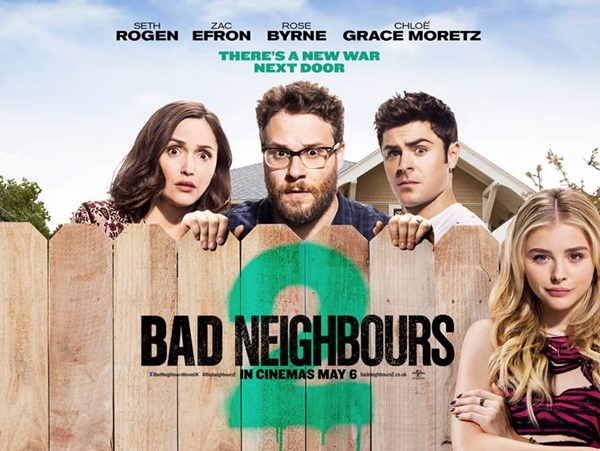 Check out the latest trailer for the film below. Drugs, nudity, swearing; this clip has it all...

popular
One of the best movies of the decade has just been added to Netflix
Cristiano Ronaldo 'agrees £173m-a-year deal' with Saudi club
The latest Star Wars episode is directly based on an IRA funeral
Starbucks worker breaks down in tears after they're scheduled to work 8 hours
Country singer Jake Flint, 37, dies in his sleep just hours after his wedding
20 years ago, one of the best sci-fi movies of the 21st century was a box-office bomb
11 Irish counties in the spotlight as Gardaí crack down on sex trade
You may also like
2 months ago
WATCH: Powerful Sinead O’Connor documentary primed for Oscar glory
2 months ago
WATCH: Brad Pitt and Margot Robbie return to Hollywood in the coke-fuelled Babylon
2 months ago
WATCH: Apple's iPhone 14 event featured some creepy teases for Severance Season 2
3 months ago
WATCH: The new Gotham Knights trailer reveals full gallery of villains
3 months ago
WATCH: The full trailer for Cobra Kai season 5 has landed
3 months ago
WATCH: House of Hammer details the alleged crimes of award-winning actor Armie Hammer
Next Page