We're not crying; you're crying!

Paul Walker's daughter Meadow, 22, has tied the knot with actor Louis Thornton-Allan on Wednesday, and she was walked down the aisle with none other than Vin Diesel.

Meadow confirmed the heartwarming news on Instagram, captioning a black and white video of highlights with "We're married!!!!"

The happy couple had been engaged for two months.

Meadow's father, Paul Walker, died just under eight years ago. Most known for the Fast and the Furious Franchise, the actor died in November 2013 after the Porsche Carrera GT he was in crashed into a concrete pole and became engulfed in flames. 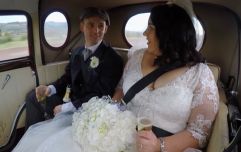 END_OF_DOCUMENT_TOKEN_TO_BE_REPLACED

The car was travelling at 80-93mph in a 45mph zone when businessman Roger Rodas lost control and crashed near Kelly Johnson Parkway, California. Both Rodas and Walker were killed in the crash, with the coroner's report ruling it was due to the combination of the impact and fire.

In a genuinely touching moment, one photo shows Meadow walking down the aisle by her Godfather and her dads' best friend, Vin Diesel.

Last month, Meadow shared an image of the two of them to celebrate what would have been his 48th birthday. "Happy Birthday Daddy, I love you," she captioned the post.

Meadow had previously set up a foundation in her late father's name.

"I wanted to start this foundation because I want to share that piece of him with the world.

"I want to share that part of him with others. I am tremendously proud to be launching The #PaulWalkerFoundation (@paulwalkerfdn) on his birthday. I can't think of a better way to celebrate my father."

popular
Man in his 50s dies following fatal assault in Kerry
Coleen Rooney 'confident she's won' Wagatha Christie trial against Rebekah Vardy, according to reports
Met Éireann issue warning for potato blight this week
The JOE Movie Quiz: Week 155
Tory MP facing drink spiking claims as one fellow politician woke up to find 'nipples being licked'
QUIZ: If you get 15/15 in this General Knowledge quiz, give yourself a pat on the back
Belgium becomes first nation to introduce compulsory monkeypox quarantine
You may also like
7 months ago
Bride asks guests to pay per slice of cake eaten at wedding
1 year ago
120 person wedding party in Longford was "very disappointing", says Pavee Point Co-Director
1 year ago
Police in London break up wedding party with 400 guests at school
2 years ago
The most Instagrammed honeymoon destinations in the world have been revealed
2 years ago
Man sues ex-wife's new lover for "alienation of affection" - and wins
2 years ago
Survey shows that Irish people think the best age to get married at is between 30-33
Next Page