People were disappointed the show wasn't on our screens.

The Guards: Inside The K has proven to be a massive hit with Irish viewers over the past few weeks.

The five-part series has gained unprecedented access to the work carried out by An Garda Síochána in the K District, Ireland’s busiest policing district which includes Blanchardstown, Finglas and Cabra in Dublin. 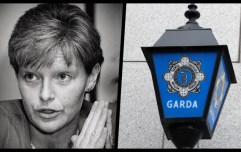 END_OF_DOCUMENT_TOKEN_TO_BE_REPLACED

The show airs on Wednesday nights on Virgin Media One, but viewers were disappointed to discover that it wasn't on their screens this week.

Virgin Media said it had decided to postpone the airing of this episode until a later date.

“Due to the nature of content in [Wednesday's] scheduled episode of The Guards: Inside The K which deals with themes of mental health and suicide this programme will be postponed to a later date," Virgin Media said in response to a query from JOE.

The show will return next Wednesday (25 March) in its usual slot of 9pm.

popular
County where winning Lotto jackpot ticket worth nearly €9 million was sold confirmed
Dublin Bus and boat involved in city centre collision
Netflix has just quietly added 30 big movies to its library
Welder awarded €15,000 for unfair dismissal despite admitting to drinking alcohol before work
Here's the line-up for this week's episode of The Late Late Show
10 years ago today, the scariest movie ever made (according to science) was released
Graham Norton reveals the one celebrity he'd love to have interviewed
You may also like
1 hour ago
Dublin Bus and boat involved in city centre collision
3 hours ago
Man hospitalised after reportedly sustaining facial injuries in stabbing incident
5 hours ago
Man arrested following fatal assault at Kerry funeral
5 hours ago
One woman dead and four injured after separate crashes in Clare and Mayo
23 hours ago
Man in his 40s dies following assault at funeral in Kerry
1 day ago
Fifth male juvenile arrested in connection with ramming of Garda vehicle in Cherry Orchard
Next Page