WATCH: Dáithí Ó Sé milking a cow at the Rose of Tralee will haunt your dreams forever

OK, to clarify from the off, it's a fake cow with fake udders. It was on stage at the Rose of Tralee. And Dáithí Ó Sé was milking it, literally and figuratively, for all it was worth.

Laois Rose Grainne Hogan comes from a farming background and revealed that she milks 110 Friesian cows, twice a day.

But Dáithí admitted that he doesn't know how to milk a cow, and Grainne found this inexcusable and decided she'd show him live on stage with a fake cow.

The moment actually summed up the Rose of Tralee pretty well, and as much as we love Dáithí, we're going to find it very difficult to get the running commentary from Dáithí out of our heads.

Find someone who talks to you the way Dáithí talks to a plastic cow.#RoseofTralee pic.twitter.com/71W0eXbN78 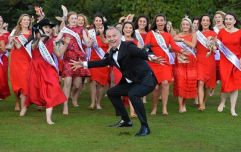 Meath Rose wows viewers as she lifts 100kg on stage

END_OF_DOCUMENT_TOKEN_TO_BE_REPLACED

All in all though, it was a good first night for the live shows and Dáithí was in flying form throughout, bringing the best out of some of the Roses and managing to alleviate some of the early nerves.

And Westmeath Rose, Leanne Quinn, squatted with Dáithí across her back. All while wearing a ball gown.

Some first night down in Tralee...


popular
The lineup for this week's Late Late Show has been revealed
QUIZ: Can you name all these European countries just from their vowels?
QUIZ: Can you guess the pixellated movie posters?
Met Éireann says there's a risk of snow for parts of Ireland this weekend
QUIZ: How many of these Recess characters can you name?
Man being treated for suspected case of coronavirus in Belfast
Star Trek: Picard mostly manages to boldly go where no Star Trek show has gone before
You may also like
11 months ago
Former Rose of Tralee winner announces intention to run as an MEP candidate for Fine Gael
1 year ago
Here's the Late Late Show line-up for its big Friday night return
1 year ago
Investigation launched into alleged racial abuse of Rose of Tralee winner Kirsten Mate Maher
1 year ago
Waterford Rose Kirsten Mate Maher wins Rose of Tralee 2018
1 year ago
WATCH: Carlow Rose wins a lot of fans for discussing heroin addiction in her family
1 year ago
WATCH: Westmeath Rose squats with Dáithí Ó Sé on her back
Next Page