WATCH: This episode of Tellytubbies was so creepy it was banned from TV

It's one of the oddest things you'll see all day.

As a big fan of Joy Division and as somebody who grew up around the same time as Tellytubbies was first being aired, one of my favourite things on the internet is the online video of the children's TV show in black and white, set to 'Atmosphere' by the post-punk band.

To be honest, it's one of those things that's a lot better when you watch it than when you read about it. So here you go: 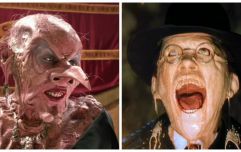 QUESTION: Which film scene scared the crap out of you as a child?

END_OF_DOCUMENT_TOKEN_TO_BE_REPLACED

But it turns out that you don't need to add some music and change the contrast to find yourself a creepy Tellytubbies clip.

There's actually an episode of the show that was banned from TV because it freaked children out so much, as reported by NME.

The episode in question, featured a lion and a bear made of moving cutouts, which were unintentionally really weird looking. After being tested with children, ‘See Saw’ as it was titled, was banned from being aired.

A sketch within the ep in particular became controversial due to its scary and inappropriate appearance and nature. Watch it here:

As a result, certain segments of the episode were removed and a brand new edited sketch was made, however the new one was still banned in other countries, such as the US.

And you can't deny it is all a bit weird.

The Big Reviewski || JOE · The Big Reviewski with Dune, a mini-Hangover reunion & the best of Timothée Chalamet
popular
Report: Crew left Alec Baldwin film set in protest before fatal shooting
PICS: The man with the biggest penis in the world has one unbelievable problem with it
The 50 most iconic songs of all time* have been revealed
9 of the best horror movies on Netflix right now
The JOE Friday Pub Quiz: Week 266
Alec Baldwin was told prop gun was safe before fatal shooting
Here's the line-up for tonight's episode of The Graham Norton Show
You may also like
3 years ago
Oreo have released two new flavours and we're not exactly in a rush to try them out
3 years ago
Mayo ice-cream is now a thing that exists, confirming humanity has collectively lost its mind
3 years ago
PICS: Rats break into ATM, chew up over €15,000 worth of notes
3 years ago
All-You-Can-Eat restaurant forced into bankruptcy after two weeks due to customers eating too much
3 years ago
People in a small town in Florida were sent into a panic when an alert was issued for a zombie outbreak
3 years ago
WATCH: Football player sets fire to their own open-top bus during title-winning celebrations
Next Page