It will be the first Jackass movie since Jackass 3D in 2010.

The Jackass cast are back with new faces and plenty of pranks and stunts for the hilarious first trailer for Jackass Forever.

The trailer sees Jackass stars Johnny Knoxville, Steve-O, Wee Man, Chris Pontius and Dave Englund among others as they once again take part in some utterly ridiculous stunts - including, but not limited to, exercise bikes strapped to giant hands, marching bands performing on treadmills, and Johnny Knoxville fighting a bull. 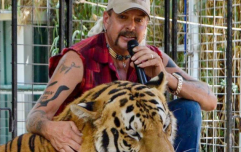 END_OF_DOCUMENT_TOKEN_TO_BE_REPLACED

And if that's not enough to peak your interest - there’s even a live bear on hand too.

Along with the fan favourites who will be making a return to screen, the cast will also include a few new additions to the cast including Jasper Dolphin, Rachel Wolfson, Sean “Poopsie” McInerny, Zack Holmes, and Eric Manaka as well as some guest stars such as Eric André too.

The movie will be the first full Jackass film since Jackass 3D in 2010 and the team's first movie in general since Bad Grandpa in 2013.

This is also the first Jackass movie the team has developed since the death of original cast member Ryan Dunn back in 2011.

The film is set to be released in theaters on 22 October.

You can take a look at the full trailer here:

The Big Reviewski || JOE · The Big Reviewski with Dune, a mini-Hangover reunion & the best of Timothée Chalamet
popular
WhatsApp to stop working on 53 phone models, including iPhone 6
Clashes between protestors and private security as tenants removed from Dublin property
Updated Status Orange warning issued for three counties as heavy rain to continue
Alec Baldwin could face criminal charges over fatal film set shooting
Irish hotel named as the scariest place to stay in Europe
Vaccine passes could be needed for hospital visits, Leo Varadkar suggests
QUIZ: Can you identify which of these countries have the colour red in their flag?
You may also like
8 hours ago
8 great new additions to Amazon Prime Video in November
1 day ago
Dune: Part Two has been officially greenlit and given a release date
1 day ago
Succession has been renewed for a fourth season
1 day ago
A recent Oscar Best Picture nominee is among the movies on TV tonight
2 days ago
A brilliant, under-seen Graham Taylor documentary is on TV tonight
2 days ago
A villainous Tom Cruise performance is among the movies on TV tonight
Next Page