The news we'd all secretly been waiting for... Popstars is now available to watch online.

It is by far the best Irish reality show to date and provided the biggest shocker on Irish TV. OK, so we might be exaggerating slightly, but we will all remember for ever more what happened to poor Nadine Coyle from Derry and her date of birth. 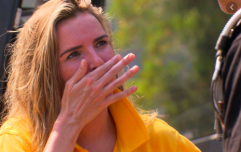 END_OF_DOCUMENT_TOKEN_TO_BE_REPLACED

If you watch closely you'll also be able to see a young Una Healy from The Saturdays auditioning.

You're now able to watch the whole series online and just in time for Christmas. Unfortunately, like most good things it has an expiry date.


popular
Study shows it takes men four months of dating before they’re happy to share food with their partner
Tayto have launched two brand new crisp flavours for you to get stuck into
Met Éireann issues status yellow rainfall warning for four counties
Here are all the best new titles coming to Netflix in March
It's Week 20 of JOE's 19 in 90 quickfire quiz
Gardaí launch investigation into four-lane motorway sulky race
The story behind Netflix's latest true crime documentary is absolutely off-the-wall bonkers
You may also like
3 days ago
QUIZ: How well do you know The Wedding Singer?
4 days ago
THE JOE Movie Quiz: Week 41
4 days ago
QUIZ: Can you get full marks in our Top Boy quiz?
4 days ago
BBC will show an 'immensely powerful' documentary about The Troubles tonight
4 days ago
Narcos creator discusses his exciting plans for the show's future, if a new season is made
4 days ago
Which video game do you think would make a great movie?
Next Page