WATCH: The trailer for HBO's Chernobyl mini-series is absolutely chilling

A new HBO mini-series is never a bad thing.

HBO is renowned for the quality of its programming. There's been a few duds here and there throughout its history but shows like The Sopranos, The Wire, Game of Thrones and True Detective have given the network a reputation for televisual excellence.

Their mini-series in particular have been hugely impressive, with companion shows Band of Brothers and The Pacific being extremely well-received and fondly remembered in the years since they hit our screens. 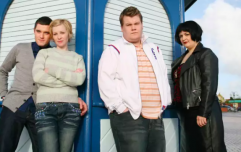 END_OF_DOCUMENT_TOKEN_TO_BE_REPLACED

We could be set for another addition to that list of great series after the network released the trailer for their upcoming mini-series, called Chernobyl.

The series is based on the story of the Chernobyl disaster that happened now-abandoned town of Pripyat in Ukraine on 26 April 1986, and the subsequent fallout.

The trailer suggests that the show will be part mystery, part thriller and part horror, with a number of horrific images showing up in the 2 minute 28 second snippet alone.

The show features a stellar cast including Stellan Skarsgård, Emily Watson and Irish actor Barry Keoghan and will premiere on 6 May on HBO and Sky Atlantic.

“There was nothing sane about Chernobyl.”

popular
Eamon Ryan flags the introduction of tougher sanctions for breaching the 5km travel limit
QUIZ: Can you name all of these countries just from one of their cities?
Northern Ireland Department of Health calls out Taoiseach's "wholly incorrect" comments about testing for UK variant
The JOE Movie Quiz: Week 86
Majority of English people 'pleased' or 'not bothered' by prospect of united Ireland
Ireland adores Leitrim hurler Zak Moradi on Tommy Tiernan show
The 50 most iconic songs of all time* have been revealed
You may also like
1 month ago
QUIZ: How well do you remember the TV Shows of 2020?
3 months ago
Gogglebox is looking for Irish people abroad for its Christmas special
3 months ago
TG4 is looking to fund five new Irish TV dramas
3 months ago
QUIZ: Name the obscure characters from The Simpsons (Part Three)
4 months ago
QUIZ: Name the obscure characters from The Simpsons (Part Two)
4 months ago
QUIZ: Only true Peep Show fanatics will get full marks on this quiz
Next Page