Will Farrell has put a call out for anyone willing to host him and his mum for the Eurovision song contest in Liverpool, next year.

The actor is hoping to head to the UK to watch the finals live in the North West after second-placed Sam Ryder bagged hosting rights in Turin in the summer. 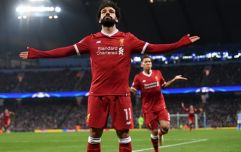 Football fans will be watching this documentary on TV tonight

END_OF_DOCUMENT_TOKEN_TO_BE_REPLACED

After a closely-fought competition, Liverpool was crowned the host city, beating competition from Glasgow, Newcastle and Leeds.

It will stage the event at the Arena next to the River Mersey on Saturday 13th May, with tens of thousands of people expected to descend on the city over the weekend. However, the influx of interest has resulted in a squeeze in hotel accommodation.

Airbnb and hotel prices have skyrocketed online, with room rates hitting £5,000+ in places.

Last month, Liverpool mayor Steve Rotheram slammed hotel costs, saying he was deeply disappointed at the "grossly inflated prices". He said he did not want anybody to be prevented from visiting the city because of the cost.

"For our area it is a fantastic chance to showcase all that is good in a great city - and beyond," he said.

"That is why it is so disappointing to see some businesses in our region who have jumped at the chance to grossly inflate prices. I've called this behaviour out several times before, especially when football fans have been ripped off for flights and accommodation."

Will Ferrell - who starred in 2020 musical comedy Eurovision Song Contest: The Story of Fire Saga - is keen to visit the city, but has been faced with a dilemma over where his mum could stay.

In an interview with presenter Zoe Ball for BBC Radio 2, Ferrell explained how his mum "really wants [him] to take her to Eurovision".

"She's dying to go and she's always wanted to go to Liverpool," he said.

However, when looking at where she could stay, the Elf star noted hotels are "all booked now".

Ball turned to listeners to ask if anyone would be "willing to put up with Will Ferrell and his mum in Liverpool or the Liverpool area during Eurovision".

And as if fans of the star wouldn't already be chomping at the bit to offer their homes to him, Ferrell joked that all he and his mum "need is a room with just two bunk beds" which is "clean and tidy".

popular
Conor Mcgregor hit by car ‘at full speed’ while cycling
Colin Farrell shouldn't win the Oscar this year
Parents left in shock after gorillas start mating in front of kids at zoo
S Club 7's Hannah Spearritt and children left homeless after being forced from home before Christmas
New Netflix series deserves to be as big as Stranger Things
Netflix has just added one of the best sci-fi movies of recent years
The 50 most iconic songs of all time* have been revealed
You may also like
5 months ago
Nine-year-old girl shot dead in Liverpool
7 months ago
Merseyside police defend ‘exemplary’ Liverpool fans tear gassed by French police
1 year ago
Police issue warning over CCTV footage of Liverpool bomb explosion
1 year ago
Liverpool bomb declared a terrorist attack as police confirm fourth arrest
1 year ago
Liverpool bomb: Taxi driver "locked bomber inside car" after spotting explosives (Report)
2 years ago
Gini Wijnaldum shares his favourite gym exercises for building abs of steel
Next Page