Reports suggest that Simon Cowell is going to get rid of The X Factor after 15 years.

The X Factor has given us some great acts over the years. One Direction, James Arthur, Leona Lewis, JLS, Olly Murs and Alexandra Burke are just some of the big names that the reality TV show has produced.

END_OF_DOCUMENT_TOKEN_TO_BE_REPLACED

But it looks as though the show, as we know it, could be no more.

A source close to the show told the Daily Star: “The decision has been made to drop The X Factor in its current form. It has been 100% axed. The show is done."

They went on to say that: "It’s being replaced by a show that’ll only be for celebrities. Members of the public won’t get to take part. So viewers won’t see new talent being discovered anymore. It’s the end of an era.".

The end of an era indeed. 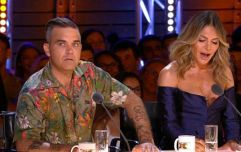 END_OF_DOCUMENT_TOKEN_TO_BE_REPLACED

The same insider told the newspaper that a dozen members of production staff were made redundant during the week:

"The casting team and everyone working on pre-production were told they weren’t needed anymore. It came as a massive shock to everyone.

"They had been working really hard to find talented acts for the next series and all of a sudden they find out it won’t be happening."

It will be really interesting to see how this develops.

A celebrity version of The X Factor? We're not quite sure what to make of that, but no doubt there could be some value in it.

popular
Prince George reportedly told classmate "my father will be King so you better watch out"
Two new 24-hour bus services are coming to Dublin
Jeffrey Dahmer’s dad thinks he knows what’s to blame for son becoming a serial killer
Budget 2023: Cigarettes going up, energy credits announced, child and social welfare increases confirmed
An underseen disaster film is among the movies on TV tonight
QUIZ: Test your knowledge with this Ultimate Friends Character Quiz
CONFIRMED: Renters to benefit from €500 tax credit as part of Budget 2023
You may also like
9 months ago
Ranking all the Christmas number ones of the 2010's
2 years ago
Pussycat Dolls reunion on X Factor results in over 400 complaints from viewers
3 years ago
A scene by scene analysis of the time JLS ruined Christmas for everyone
4 years ago
QUIZ: How well do you remember these former X-Factor contestants?
4 years ago
Louis Walsh explains why he grabbed Mel B's backside on television
5 years ago
Contestants on several famous reality TV shows reveal just how fake it all really is
Next Page