The Tommy Tiernan Show is fast becoming one of the best talk shows around.

With the fast-and-loose but also incredibly intelligent and entertaining aspect of Tiernan not fully knowing who he is going to be interviewing as the show begins, there is a brilliant edginess to the set-up that you don't really get in any other talk-show.

Recent weeks have brought some amazing chats with the likes of Hozier and James Leonard, but Tiernan's reaction alone when he discovered that his first guest on Saturday night was going to be Michael D. Higgins himself was incredible. 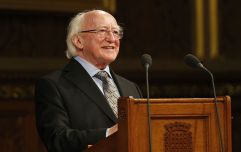 END_OF_DOCUMENT_TOKEN_TO_BE_REPLACED

We've known for some time that Tiernan and Higgins are good friends, frequently calling each other up just for the craic, and that friendship was hugely apparent during their conversation on the show.

The interview was all-encompassing, ranging from Higgins' recent visit to Auschwitz to how his love of reading as a child lead to his hunger for knowledge as an adult.

Tiernan also does a fantastic job of showing more of the man behind the President, revealing further that Higgins possesses a killer sense of humour, dishing out as many great one-liners as the comedian host himself.

You can watch a snippet from the interview below, and the full conversation will be made available on the RTE Player here.

The Big Reviewski || JOE · TBR Spotlight: The Falcon and the Winter Soldier Episode Four - 'The Whole World is Watching'
popular
The 50 most iconic songs of all time* have been revealed
PICS: The man with the biggest penis in the world has one unbelievable problem with it
People think they've figured out the ranking of the viewers on your Instagram Stories
The JOE Movie Quiz: Week 97
Reeling in the Years: How the 2010s are different to any other decade
Irish mobile network GoMo launches new €14.99 per month "for life" offer
15 songs that are always used in sporting montages
You may also like
2 days ago
President Michael D Higgins expresses condolences to Queen on death of Prince Philip
2 weeks ago
President Michael D. Higgins receives first dose of Covid-19 vaccine
3 weeks ago
President Higgins calls for global solidarity against Covid-19 in St Patrick's Day message
1 month ago
Australian Embassy in Ireland make history by flying Aboriginal flag
2 months ago
Michael D. Higgins releases touching statement in honour of St Brigid's Day
2 months ago
Church and State "bear heavy responsibility" over Mother and Baby Homes, says President
Next Page