Talk about a day to remember.

Following the success of Father Ted, Ardal O'Hanlon had quite a few surreal experiences throughout his life, but it's hard to imagine that any could top this.

Way back in 1996, Ireland were playing Holland in a World Cup play-off match, and O'Hanlon was one of thousands who was in attendance. 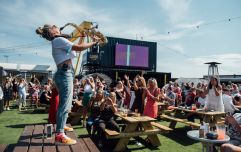 END_OF_DOCUMENT_TOKEN_TO_BE_REPLACED

But he was the only person at Landsdowne Road that night who was airlifted via helicopter to sing 'My Lovely Horse' alongside Moby on stage once the final whistle went.

Speaking about this incredible incident, O'Hanlon told Dion Fanning on Ireland Unfiltered that he was unsure about whether or not he even wanted to go, as he was equally as excited to have a pint with his mates after the game.

But he did go, and he certainly doesn't regret it.

Talking about the situation, he said: "So they said 'Oh well look, we can get you down there in a helicopter after the match and you'll still be on time for the show.' 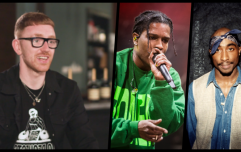 END_OF_DOCUMENT_TOKEN_TO_BE_REPLACED

"So I was glad I went but it was absolutely nerve wracking. I was so terrified. I just never understood that whole rock/monster thing. But when you're in front of that amount of people, people talk about the energy coming off stage and you feed off the energy and everything else.

"I didn't know that that was a physical thing. It is like a tsunami hitting you in the face. It's physical. And I went momentarily blind and deaf when I was up there so I don't actually have a clear memory of being on stage with Moby.

He added: "And of course me being me was thinking 'Ah they're going to hate me, they're here to see Moby and U2 later on and they don't want to see me and I'm going to fecking ruin it for everyone and they won't know Father Ted, like some of them will but most of them won't. They're not here -'

"They all knew the words. It was incredible. And the roar when you go on stage and that roar is what I'm talking about. It was like it hit me." 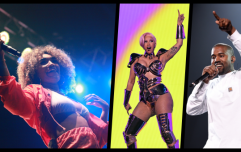 END_OF_DOCUMENT_TOKEN_TO_BE_REPLACED

popular
Bus Éireann’s service from Dublin to London will restart this week
Gardaí unveil new Armed Support Unit vehicles to replace older models
One in two young people likely to not own a home by the time they retire
Rockstar Games reportedly shelving remasters of two of the best games ever made
Conservative Party vice chairman resigns live on TV as Johnson administration thrown into turmoil
One of the greatest crime movies of all time could be getting a sequel
An action-packed thriller is among the movies on TV tonight
You may also like
3 hours ago
5 must-watch shows and movies arriving on NOW in July
1 day ago
Heading on staycation? Don't miss these 7 must-see attractions on your next trip to Mayo
1 day ago
COMPETITION: WIN a whiskey blending class in Dublin for you and a friend
4 days ago
COMPETITION: WIN a two night stay at the luxury Breaffy House Hotel in Mayo
5 days ago
COMPETITION: Your chance to WIN a €400 van rental voucher to fund your Irish road trip with Mr Tayto
5 days ago
One of the best sports movies of recent years is now available to stream at home
Next Page