WATCH: Billie Eilish is the latest to get the Carpool Karaoke treatment

Billie Eilish is so much cooler than we will ever be.

As far as years go, Billie Eilish has quite a decent one.

A meteoric rise to the very top of the music business, and a whole host of awards to go with it. 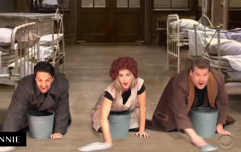 END_OF_DOCUMENT_TOKEN_TO_BE_REPLACED

The 18-year-old became the youngest person ever to be nominated in all four top general field categories in the same year of the Grammy Awards - Record of the Year, Song of the Year, Album of the Year and Best New Artist.

In what is definitely one of the more genuine editions of the segment, Eilish reflects on the truly bizarre level of success that she has achieved at such a young age.

She also spoke about her childhood, and how her and her parents had a rule that they couldn't make her go to bed so long as she was making music.

At one point in the video, she actually gets quite emotional as she listens to the song 'Ocean Eyes', which she recorded when she was just 13 years old. Ridiculous.

And we even get to meet her mam!