Billie Eilish is having a fairly great 2019.

The rise of Billie Eilish has been one of the biggest success stories of the year so far, when it comes to the music industry.

12 months ago, she was still somewhat of a big name in certain circles, but you would definitely be forgiven for never having heard any of her music.

END_OF_DOCUMENT_TOKEN_TO_BE_REPLACED

Now, one of the biggest names on the Electric Picnic lineup for this summer's festival, we're sure you've heard of her by now.

And one of her best known songs is 'My Strange Addiction', from her debut LP, When We All Fall Asleep, Where Do We Go?

Two things came to mind when fans heard the song: 1) It's a banger, and 2) it sampled a classic scene from The US Office.

END_OF_DOCUMENT_TOKEN_TO_BE_REPLACED

Speaking about the scene that was sampled, Eilish told MTV News:  "When we made the beat for ‘My Strange Addiction,’ it reminded me of the song they play when they do the Scarn dance.

"I thought that was really funny, so we literally just ripped the audio from Netflix and put it in the song, not at all thinking that they would say yes to it and we’d be able to put it out. Also, it’s about strange addictions, and The Office is mine, so..."

And the creators of The US Office have since responded to the news. 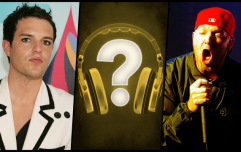 END_OF_DOCUMENT_TOKEN_TO_BE_REPLACED

"They had to get approval of all the cast that was on it. I was fine with it regardless, but I was like 'Wow, bonus: This is a banger.'

"Until you told me about her, I didn’t know who she was. It’s not a knock on Billie Eilish, it’s more a commentary on how old I am. It was a real double whammy, learning someone’s existence and then learning that they used [the episode]. I looked at the song and I loved it. It’s great."

popular
A classic Western is among the movies on TV tonight
One of the most underrated sequels of all time is among the movies on TV tonight
The JOE Friday Pub Quiz: Week 300 - the Triple Century
An underrated Jason Statham thriller is among the movies on TV tonight
The 50 most iconic songs of all time* have been revealed
Met Éireann gives update on weather warnings for this weekend
Met Éireann issues thunderstorm warning for 11 counties
You may also like
11 months ago
HBO reportedly paid James Gandolfini $3 million to NOT replace Steve Carrell in The Office
1 year ago
QUIZ: How well do you know The Office UK Christmas special?
2 years ago
Who said it: David Brent or Donald Trump?
2 years ago
The ultimate UK Office quiz - Season 1
2 years ago
Netflix acquires rights to the best sitcom ever made
2 years ago
Two of the stars of The Office US to reveal behind-the-scenes stories on new podcast
Next Page