Daniel O'Donnell has been in the news a lot recently.

Firstly, he was the victim of some poor graphics by the Sky News team. 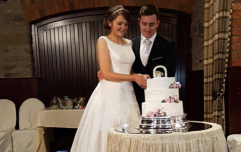 WATCH: Irish groom serenades his bride down the aisle in lovely video

END_OF_DOCUMENT_TOKEN_TO_BE_REPLACED

Then he got that look from Pope Francis during his performance.

And finally, he made a woman's day on a flight recently when he took a moment to sing 'Happy Birthday' to her.

All in all, an eventful few weeks. Although it's showing no signs of slowing down as on Friday night, he made another person's day when he crashed a wedding in Sligo.

Bernadette O’Dowd and Clem Duke had their wedding reception in The Radisson Blu Hotel in Sligo on Friday, and it just so happened that Daniel was staying in the hotel that night. 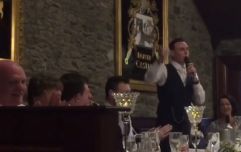 WATCH: Louth man gets married and thanks everybody with epic Home and Away sing-song

END_OF_DOCUMENT_TOKEN_TO_BE_REPLACED

Suzanne McTiernan was at the wedding and speaking to JOE she said: "It was a very lively wedding but the highlight of the night was when Daniel O’Donnell walked in, asked for the bride’s mother Attracta and brought her out for a waltz.

"When he was checking into hotel, he was asked if he would surprise the mother of the bride by going into the wedding reception and giving her a dance.

"Such a gentleman he is, not only did he give Attracta a waltz but he also brought her up on stage and joined the band, The Weightless Astronauts. He had the whole floor singing along with him to the song 'This is my homeland'.

Daniel O'Donnell, the gift that keeps on giving.

Cheers to Suzanne McTiernan for sending this our way. Got a story for JOE? Fill out our online form here.

popular
Disney+ has just added 10 big movies to its library
People want "offensive" Crown Paints advert banned after attracting hundreds of complaints
Netflix has just added 23 very big movies to its library
Human remains found in suitcases are the bodies of two children
A terrific '90s crime drama is among the movies on TV tonight
WATCH: The full trailer for Cobra Kai season 5 has landed
The 50 most iconic songs of all time* have been revealed
You may also like
2 months ago
Elvis weddings could soon be banned from Las Vegas
9 months ago
Vin Diesel walked Paul Walker's daughter down the aisle
10 months ago
Bride asks guests to pay per slice of cake eaten at wedding
1 year ago
120 person wedding party in Longford was "very disappointing", says Pavee Point Co-Director
1 year ago
Police in London break up wedding party with 400 guests at school
2 years ago
The most Instagrammed honeymoon destinations in the world have been revealed
Next Page